I am awkward, and for that reason I’ve decided the sea slug Melibe will be my new power animal. I’m clumsy, equally bad at all sports, and catch roughly 2% of things that are tossed to me; I can’t relate to those other power animals. If I’m going to adopt a spirit animal, it’s gotta be something that is awesome despite also being silly. Even better, it will be awesome because it is silly. That’s my power animal. That’s a Melibe.

Melibe: the love child of a stegosaurus and a jellyfish. There are roughly 25 Melibe species around the world, from the US Pacific west coast to the Indo-Pacific and Australia. Melibes have plates like dinosaurs, heads like jellyfish, and best of all, they smell like watermelon (at least for my personal favorite: Melibe leonina. Other species may come in different flavors…). But to really dig into the true awesomeness of a Melibe, let’s take a closer look at these strange animals. What are those plates? That jellyfish hood? And what’s up with this watermelon thing?

First, those cute stegosaurus plates pop off when a Melibe is stressed, and if you are a naive twenty-something undergraduate this will scare the crap out of you (sorry Melibe). But popping off isn’t the primary function of those plates. Instead, these stegosaurus plates, known as cerata, are like slimy external lungs. Like many sea slugs, Melibes breathe through their skin; more skin equals more oxygen. By growing leafy structures on their back, Melibes create a lot more skin to breath through. But when threatened, these cerata can pop off, or autotomize; bodiless cerata provide a distraction while the threatened Melibe makes a getaway. Naked Melibes look incredibly sad. But they still have their jellyfish-like heads, and thus there’s still hope of growing new plates.

That’s because this jellyfish-like head is actually how Melibes feed. 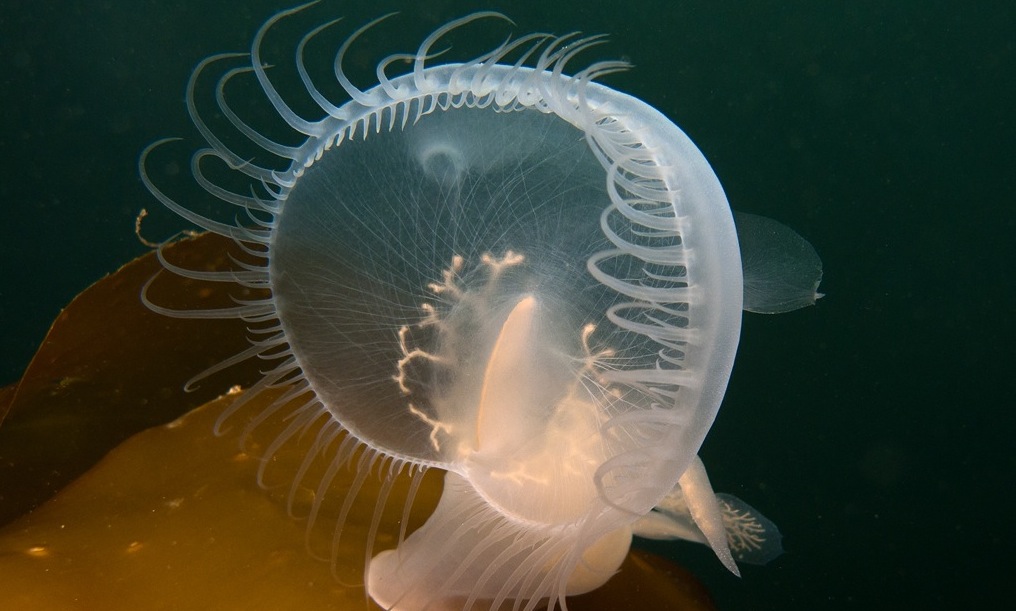 They extend this freakishly large head in front of them and around the ground, ambushing prey. The slug version of a sneak attack. The little dumbo ears are actually called rhinophores, and they’re what Melibes use to smell. The Pacific coast Melibe I accidentally scared (causing its cerata to pop off), Melibe leonina, also uses its hood like a big net, perching on kelp while filtering prey from the water. But this still leaves one last mystery: What is up with that watermelon scent?

The particular smell I’m most familiar with comes from Melibe leonina, the Pacific coast Melibe, and it’s something of a Rorschach blot of odors. No one can quite agree exactly what it smells like, though you know it when you sniff it. I’ve heard everything from strawberry to Pine-Sol to Jolly Rancher, though I personally think they smell like watermelon candy. To produce this smell, Melibe leonina makes chemicals called terpenoids. It’s no coincidence Melibes smell like fruit, because plants use a diversity of smelly terpenoids. Terpenoids are components in eucalyptus, cinnamon, menthol and even the distinctive stink of cannabis. Melibe leonina secretes these chemicals from (I’m not even kidding here) “repugnatorial glands” on its back. This helps explain how the smell, but why do they smell? 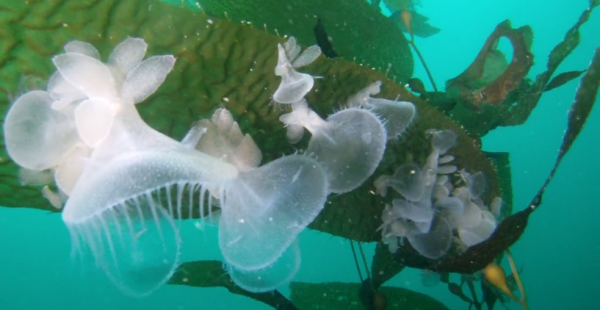 A “bouquet” of Melibe leonina. Screencap from this video.

While no one knows exactly why Melibe leonina smells, these odors may be repulsive to predators (clearly their predators are not human children). This is also probably why a group of Melibes is known as a “bouquet.”

So there you have it. A sea slug that looks like a cross between a dinosaur and a jellyfish, and smells like candy. But if you think looking awkward means Melibes are pushovers, think again. Their odd looks are also exceptional adaptations, making them effective ambush predators. Wanna see the not-so-awkward side of a Melibe? Watch the video up top, and look closely to see the small shrimp caught in the Melibe’s mouth at 1:05. Scary, awkward and awesome. In other words, the perfect power animal.

One Reply to “This sea slug is like a cross between a dinosaur, a jellyfish, and a watermelon”