Imagine a mosquito lands on your arm to feed.  The mosquito is caught in your long arm hairs.   The insect is trapped unable to fly away.  Within in short order, your epidermal cells mobilize growing a thin layer of skin over the mosquito.  These cells slowly digest mosquito providing you the nutrition to repeat the process again with the next unlucky flying insect.

My favorite sponges, in the group Cladorhizidae, feed almost exactly like this.   In a recent paper, my friend and colleague Lonny Lundsten from the Monterey Bay Aquarium describes four new species of these unique sponges.  The first is Abestopluma monticola, the scientific name referring to where it was first discovered, a seamount (Latin mont = mountain + -cola = dweller).

The second is Asbestopluma rickettsi named for the famous intertidal ecologist Ed Ricketts, made famous by John Steinbeck.

But the last name and the reasoning behind is the one that moves me most, Cladorhiza evae. In Lonny’s own words

Named in honor of Eve Lundsten, beautiful wife of the first author whose commitment and support have endured through the years. Eve’s love for the Gulf of California also inspired this naming as the type specimen was collected. 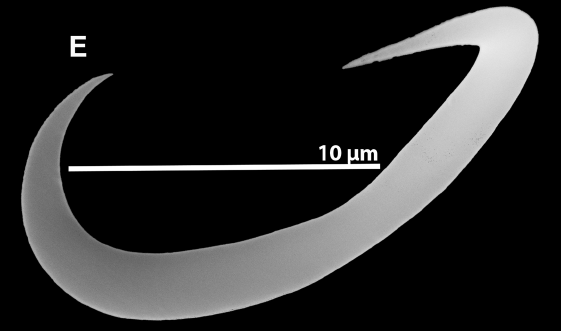 What sets the species of the deep-sea Cladorhizidae apart is a unique type of spicule, the silica rods that serve as the scaffolding of sponges.  This unique spicule of Cladorhizids is hooked.  These spicules occur across the surface of the sponge like velcro. These can snag crustaceans that land or swim near the sponge.   Once a crustacean is caught the cells mobilize and…well you know the rest of the story. What makes Lonny’s paper unique, other than describing four new species that is, is the inclusion of set of spectacular plates that actually show crustaceans caught and covered in a layer of sponge cells.  This behavior is also unique among sponges as most are perfectly content filtering particles out of the water and not consuming living flesh of nearby crustaceans. 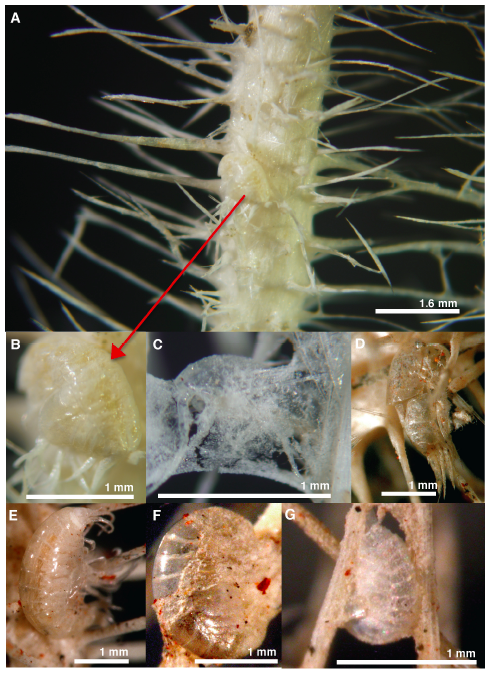