One afternoon, my coworker Lisa Guy and I are looking through her photo archive, when I spy something that looks like an purple butterball turkey being attacked by a lime green scrunchie. Of course I have to find out what it is. When I ask, Lisa pulls up the photo and says “It’s a baby cormorant being eaten by a green sea anemone.” Me – “Are you serious?! Lisa – “Totally serious. And I wrote a paper about it!” And it’s just been published in “Marine Ornithology.” 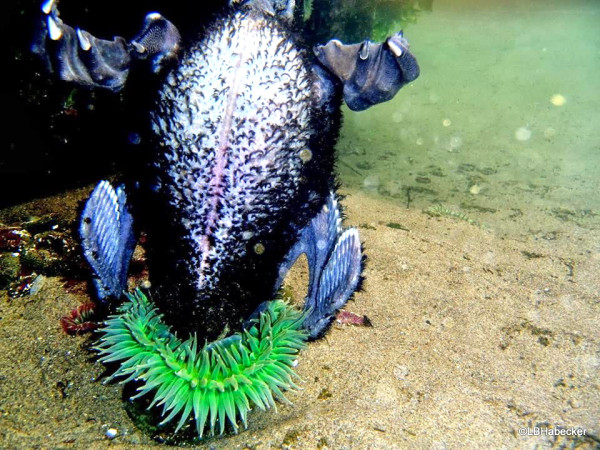 In Lisa’s words, the reason why this is so incredible is this is an “example of an apex predator being consumed by an animal that doesn’t seem to really do anything.” I would have to agree with that assessment. Anemones are usually only portrayed as being attached to rocks or waving their tentacles slowly in the ocean currents. But these images belie the true predatory nature of these Cnidarians found on the Oregon Coast. Giant Green Anemones are known to eat “small fish, crustaceans and detached mussels.” And now we can add Cormorant chicks to that list. 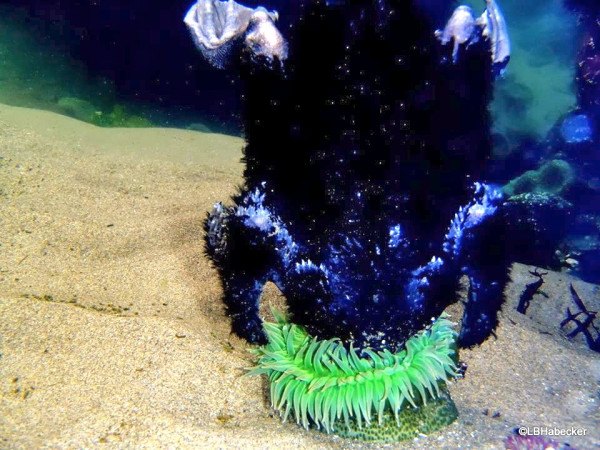 The noming from the backside.

It’s unclear how the chick got into the Anemone’s clutches. The chick may have fallen out of its nest or was accidentally dropped their by another predator. It’s also unknown whether the was dead or alive when it got stuck in the anemone, but from its state of decomposition it was probably dead for two days before being found. Regardless, when this photo was taken it was definitely being nommed by the Anemone. Even creepier, in the paper there is a photo of another anemone consuming a severed gull leg. Anemones have been observed eating other seabirds (in 2003 a gull chick was completely swallowed by another anemone) which might be a sign it isn’t rare for anemones to feast on bird bits when the opportunity arises. Clearly these creatures don’t discriminate when it comes to poultry.

While this paper solidifies in my mind that anemones are awesomely creepy, it also shows that these immobile predators utilize a variety of food sources when they need to. All I’m saying is that I’ll never look at Nemo’s Anemone home the same way ever again.