In 2009, Nereus was the new $5 million hybrid-transformer-multipurpose-all knowing-swiss army knife of deep-sea research from Woods Hole Oceanographic Institute.  Nereus, primarily funded by NSF ( with smaller contributions from the Office of Naval Research, the National Oceanic and Atmospheric Administration, the Russell Family Foundation, and WHOI), could switch between an autonomous underwater vehicle (unteathered to the surface) to a remote operated vehicle (tethered) depending on the mission.The goal, to send the Nereus to visit the 11,000m (36,089ft) Challenger Deep in the Pacific Ocean, making it the first autonomous vehicle to do so, was all mission accomplished.

The dive to 10,902 meters (6.8 miles) occurred on May 31, 2009, at the Challenger Deep in the Mariana Trench in the western Pacific Ocean…On its dive to the Challenger Deep, Nereus spent over 10 hours on the bottom, sending live video back to the ship through its fiber-optic tether and collecting geological and biological samples with its manipulator arm, and placed a marker on the seafloor signed by those onboard the surface ship. 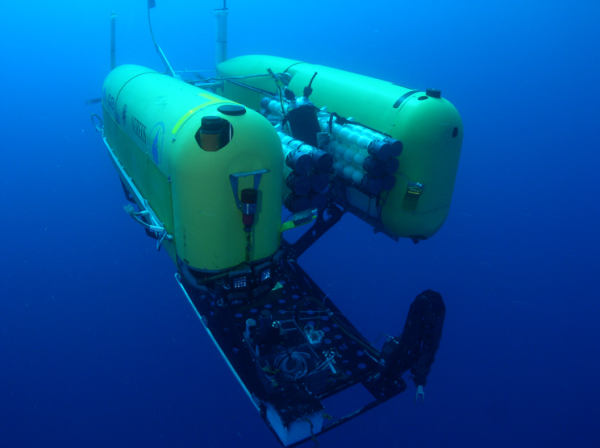 Photo courtesy of WHO

Fast forward just less than 5 years and another trench has spelled the demise of Nereus.

On Saturday, May 10, 2014, at 2 p.m. local time (10 p.m. Friday EDT), the hybrid remotely operated vehicle Nereus was confirmed lost at 9,990 meters (6.2 miles) depth in the Kermadec Trench northeast of New Zealand. The unmanned vehicle was working as part of a mission to explore the ocean’s hadal region from 6,000 to nearly 11,000 meters deep. Scientists say a portion of it likely imploded under pressure as great as 16,000 pounds per square inch….At the time it was lost, it was 30 days into a 40-day expedition on board the research vesselThomas G. Thompson to carry out the first-ever, systematic study of a deep-ocean trench as part of the NSF-sponsored Hadal Ecosystems Study (HADES) project under chief scientist Timothy Shank, a WHOI biologist who also helped conceive the vehicle.

Researchers on the Thompson lost contact with the vehicle seven hours into a planned nine-hour dive at the deepest extent of the trench. When standard emergency recovery protocols were unsuccessful, the team initiated a search near the dive site. The team onboard spotted pieces of debris floating on the sea surface that were later identified as coming fromNereus, indicating a catastrophic implosion of the vehicle. The ship’s crew is recovering the debris to confirm its identity and in the hope that it may reveal more information about the nature of the failure.