I live for moments like this. Things like this make the long nights editing grant proposals, the paper rejections, the failed experiments all worth it. To me, the best part of science is stuff like this: seeing something that completely takes my breath away. Even after studying animals like this for the last five years, this video has me in awe. The animal captured in this footage, simply put, is stunning:

This video was collected as part of the Nautilus Live expedition, a broadcast ocean exploration that anyone with internet access can be part of. The expedition is being headed by Dr. Robert Ballard, who famously discovered the wreck of the Titanic. But to me, the video above captures something much more rare and mysterious than any sunken ship.

This strange animal is a siphonophore, a relative of jellyfish. The most famous (infamous?) siphonophore is the portuguese man-of-war, but there are many species that live in the deep and are only seen on rare occasions. What’s amazing to me about about this animal is not just its strange shape, but its color. I’ve seen red siphonophores like this, a couple orange, but never ever this strange purple-blue. It’s a shocking shade, and it makes me wonder what on earth a color like that is doing down so deep. Many deep-sea animals are red. Because there is no red light in the deep sea, very few animals can see red pigment (unless they make their own red light). In the deep sea, red looks like pitch black. But what about purple? Is there any benefit to being purple? Or is this just a side effect of something it eats or where it lives?

Answering these questions is difficult, because sightings of siphonophores like this one are pretty rare. These animals are only found in the very deep ocean, and though large, they’re still small compared to the miles of water a submersible had to travel in order to find one. What’s worse, they often drift alone, not traveling in groups. This makes tracking down an animal like this more about  luck than planning. That being said, some expeditions are very lucky. So maybe we’ll get the answer one day. Until then, I’m happy to sit back and enjoy the beautiful show. 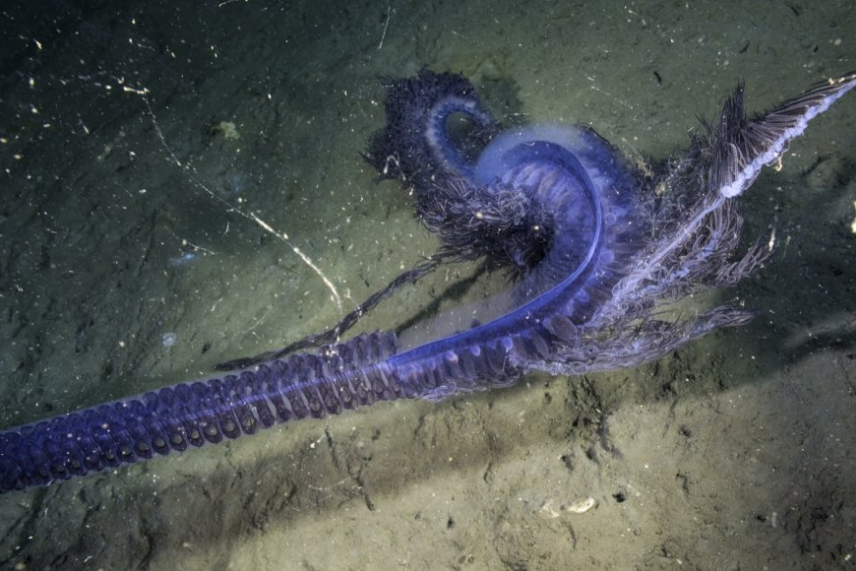 Update: A new clue on the strange color! Dr. Steve Haddock, one of the few people lucky enough to see animals like this on a regular basis, says that many species in this group (Erenna spp.) are a dark color, possibly from all the fish they eat. Here is an example Steve shared with me. Though it is nowhere near as purple as the animal above, you can see the blackish pigment in the ridges and furrows: 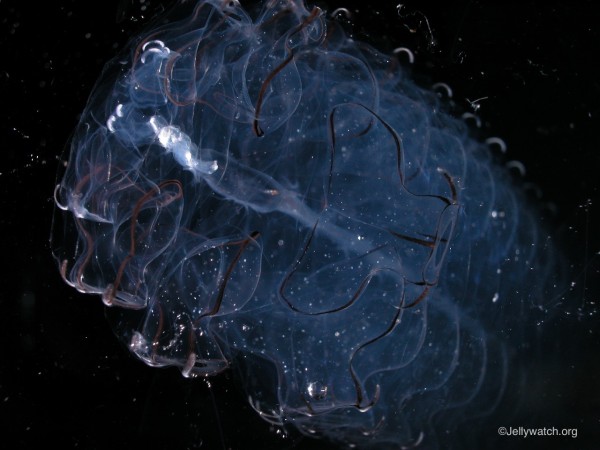 8 Replies to “Amazing purple jelly sighting in the deep sea”