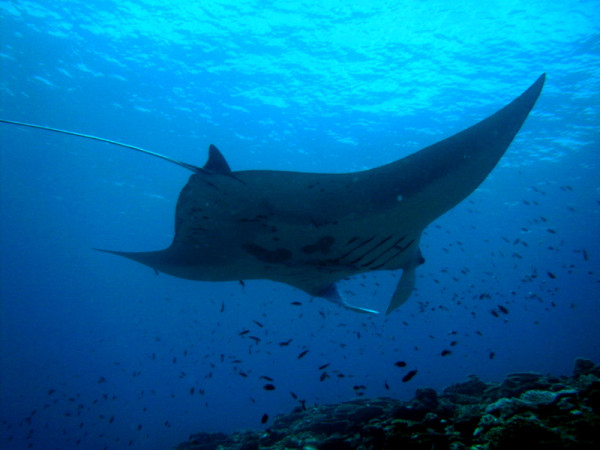 Aided by new technologies and teams of overworked graduate students and unpaid interns, and prodded by the dismal decline of these huge rays at the expense of alleged ‘traditional medicine’, marine researchers are rapidly making big discoveries into previously unknown areas of manta ray life history. Like many things in nature that seem counter-intuitive, the largest animals in the sea eat the smallest, and mantas, the largest of all rays, are filter-feeders that strain tiny marine organisms with a sieve-like set of spiky rakes in their gills. But they need to sieve a lot of sea water to get enough teensy bits of food energy to grow to their massive size (up to 20 feet across), and to gain enough fuel to make long-distance and even trans-oceanic migrations. But one sure-fire way to get the high-energy protein shake a growing manta needs is to slurp up the end-product of a reef-fish sex party.

Studying mantas at coral reefs in the South Pacific and Indian Oceans, teams of researchers found direct correlations between spawning events of surgeon fishes, tangs, and butterfly fishes, and the seemingly sudden appearance of mantas, emerging out of the depths like bat-shaped Roombas  to vacuum up future generations of reef fishes. As the spawning parties get together and mill about the reef edge, a half-dozen or more ripe and randy fish will suddenly make a dash toward the surface and simultaneously release their eggs and milt (fish semen). Fertilization takes place in the open water and the eggs, and later the larvae, float offshore, and with any luck & favorable currents the young fish will later return to join their parents on the reef, or populate other reefs miles away. But just as the fish squirt their faint milky gamete clouds, the mantas zoom in to inhale the eggs and sperm. Their gills can only strain the eggs, and the microscopic sperm cells pass through their gills. This coital caviar packs a major nutritional boost for the rays.

Observations of this Caligulan feeding activity has been seen and documented before, but emerging research suggests that mantas specifically focus on spawning fish, and don’t just take an opportunistic grab at any piscine orgy they happen to stumble upon. Spawning events on reefs are often related to tidal or lunar cycles, so Mantas may be able to predict when and where these spawning groups will occur, and likely plan their movements to exploit the breeding cycles of these fishes. Outside of the breeding season and during the evening when reef fishes are sacked out from a busy day of spawning, mantas have much less of a triple-X diet. Moving offshore and into deeper water, mantas feed on deep-sea plankton, diving over 1400 feet (430 meters) and filtering out the tiny mesopelagic organisms in the Deep Scattering Layer that rise from the depths as night falls.

One Reply to “Mantas to Reef Fishes: I Drink Your Miltshake”