So, the flower hat jellyfish pretty much looks like someone painted it while tripping on acid. It doesn’t just have tentacles on the edges, no way man, its got a tentacle party going all up over its body. It doesn’t just have pink and purple colors, it’s got blue and orange and green all over too (did I mention it glows?) And it doesn’t just look trippy with its little highlighter fro, it acts weird too. Unlike most jellies, flower hats spend most of their day just chillin’ on plants or pebbles or whatever really, only interested in swimming around for munchies once the sun goes down. They’re found only around southern Japan, and aquarists pay a premium for a chance to put them on display. That’s because the weirdest part of the flower hat jelly is this: no one had ever seen a baby flower hat before, until now.

Wyatt Patry is the guy you go to when you need a psychedelic display with a couple tons of seawater and a few dozen species of jellyfish. And that’s exactly what the Monterey Bay Aquarium (MBA) did. He is in charge of the jellies in “The Jellies Experience” exhibit, including the happenin’ flower hats. With this exhibit MBA decided not only to pay homage to the 60’s, but embrace the hypnotic-jelly-meets-trippy-visuals fad by dedicating a whole hall to jellyfish, black lights and a Pink Floyd-esque soundtrack. And that’s how Wyatt found out where flower hat jellies come from.

Yep, there was probably lots of jelly free love in that display, but because jellies release eggs and sperm into the water it probably looked really boring, and also probably happened even when the black lights and groovy music were turned off. But Wyatt wouldn’t have found the babies without the raver theme, because flower hat jelly babies are really damn tiny, but they also glow. Only by looking at the jelly tank with a black light did anyone have a prayer of finding them. And they’re adorable, and super weird. Just like their hippy parents. 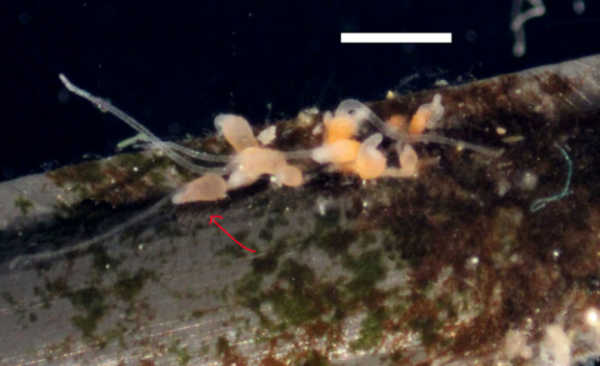 Flower hat polyps: I think the one with the red arrow is easiest to see. It’s laying on its side, with an egg-shaped body. The mouth is pointing to the left, with the one long tentacle stretching out in front of it.

These little guys are flower hat polyps, the middle life cycle stage of the flower hat jellyfish. They stick to the bottom and have little pill-shaped bodies, with one loooong tentacle on top. The tentacle is off to the side (all the cool kids do it this way) and they wave it around like they’re at their first Bob Dylan concert. Sometimes they’re found alone, other times they’re stuck together in little polyp cuddle puddles.

When the polyps are feeling up to it (in other words: I don’t know why) they bud jellyfish. The jellies start as little lumps, and grow into mini Christmas ornament balls that hang off the polyp. When they’re old enough, they pop open, inflating their wee bells, and break off. And even at this minute size, they’ve got little glowy bits. 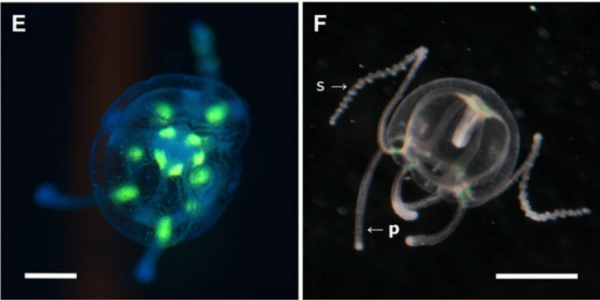 Not only did this glowing help Wyatt find them in the display, he thinks it may gives researchers a better shot at finding the early stages in the wild. And why would anyone want to do that? Flower hats are beautiful, dreamy and hypnotic, but flower-power pacifists they are not. Flower hats gotta eat, and they pack a massive sting. The yang to their hippy yin: these jellies are pretty damn dangerous. Flower hats bloom unpredictably, can causes a severe rash, and in one case their sting was fatal. They’re surreal jellies that cause very real problems. And now we’ve got one more clue into how they live their lives, all thanks to my rockin’ friend Wyatt, and some far-out public displays.