I hate all the stuff growing on whales. It’s just one of those weird personal tics. All those barnacles look annoying and itchy and the whole thing makes my skin crawl. If a whale was like, “hey Rebecca, pick these off”, I’d be all like, “OMG YES!”  And not only would I be down to help my whale friend, I imagine picking all those barnacles off would be intensely satisfying, like a 100-foot long strip of bubble wrap*. But since that hasn’t happened yet, I can generally deal. I can ignore whale barnacles because they are so common, because I’m used to them, because whales would look strange without them. I’m ok. I’m coping. I’m cool. It doesn’t bother me that much… 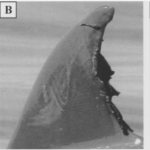 RAAAAGGGGEEEE!!!! Piercing lightning bolts of RAGE! These little jerks look like the most aggravating creatures on the planet! Attaching to delicate dolphin skin right at the margins of their flukes or dorsal fins, and dolphins don’t even have the opposable thumbs to pull them off!

And what are these things exactly? Barnacles. Of course they’re barnacles…

They’re known as Xenobalanus globicipitis, aka “my nemesis in life”. Xenobalanus globicipitis are barnacle specialists, attaching only to fast-moving marine mammals, and even then mostly to the areas exposed to the highest flow (tails and dorsal fins are great spots for that). They’ve got gooey soft elongated bodies, and even to the people who like them enough to study them, they look “more like a leech than a barnacle” [2]. To hold on, X. globicipitis have a tiny cup anchor at their base, which digs into the dolphin’s skin: 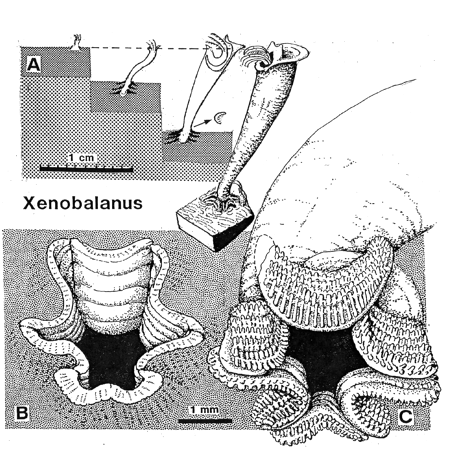 Xenobalanus globicipitis “has broken with all balanid [barnacle] traditions” [3], because so few barnacles have long blob bodies and cup-shaped back-ends. It gives them that extra maddening look because you’d think they’d be so easy remove, if only dolphins could do it. In contrast to their long bodies, their top end is capped with a little tissue plate. Out of this plate the barnacle feeding structures emerge (pretty much the only thing on this animal resembling a barnacle at all):

The top of X. globicipitis [3]. The little horn-bearing cap is the top of the animal, and the moustache-looking thing below the bumps in the middle picture are the feeding structures.

So they just hang there, feeding in the current created by dolphins as they swim. Of course they can’t be like all the other self-respecting barnacles and live on rocks. Or even like the ones that pretend to be crab gonads. NooOOOOooo…they’ve evolved to sully the sight of dolphins far and wide, making my left eyelid twitch and my lip curl. Ruining all dolphin sightings from now until the end of time.

I can sympathize on one front though: it would be fun as heck to spend your whole life riding on the back of a dolphin. They may drive me crazy, but I can definitely give them that much.

*I realize they’re imbedded in the skin and it’d probably be smelly and gross. Don’t ruin it.

6 Replies to “That looks terrible on you Dolphin- take it off!”