Last week Discovery Channel successfully botched yet another Shark Week. Big surprise there. Don’t get me wrong, there were some (and by some I mean few) shows I did enjoy, but seriously when will they let poor Megalodon just die? He and his buds have been extinct for quite a while now, no need to bring them back.

Needless to say, if I was a shark, I’d be pissed. Why? Because sharks today suffer from real shark problems. 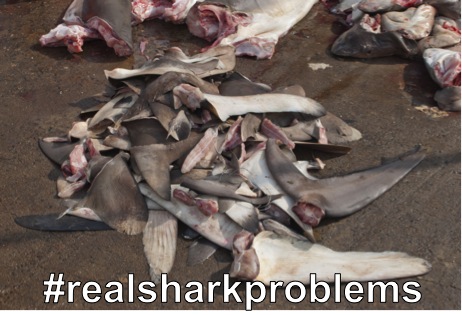 (I hereby declare #realsharkproblems a thing. David Shiffman, please make it a thing.)

With millions of our finned friends killed every year for their various bits, many shark species face Megalodon’s fate should we continue on our current path. If they want blood and gore, maybe Discovery Channel should create a show or two about that.

Beyond overfishing and the finning industry however, sharks today, and in the not so distant future, face yet another surmounting threat.

As you may or may not have learned on Shark Week, sharks and other elasmobranchs have a wicked sense of smell. They use their superior sniffers to find prey, mates, detect predators, and navigate in a seemingly endless ocean. All very important sharky behaviors.

Shark trying to figure out where all the smelly goodness is coming from, but can’t. #realsharksproblems

However a new study, out in Global Change Biology this month, demonstrates that increasingly acidified waters interfere with sharks ability to respond to these critical chemical stimuli. Can I get a #realsharkproblems up in here? Researchers discovered that exposing the smooth dogfish shark, Mustelus canis, to current, mid-range, and high-level CO2 conditions not only inhibited their ability to find prey, but also influenced their predatory behavior.

Not only is this a bad thing for sharks, but also for the greater ecosystem. Contrary to popular belief, sharks do not prefer to eat people. They do however like to eat fish, and often consume the sick and diseased fish, adding to overall ocean health. If they are unable to sense these fish, this could lead to any number of problems. Unfortunately, it is unknown as to whether or not shark species will be able to adapt fast enough to deal with the changes in ocean acidification predicted for 2100.

As if they didn’t have enough to deal with already…

3 Replies to “Future Shark: Living in an Ocean on the Brink”