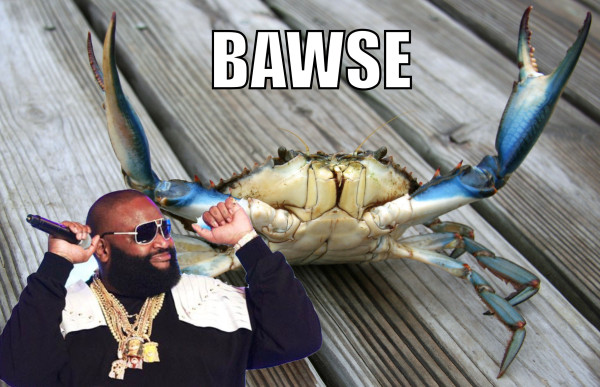 I generally bow to Dr. M and Alex when it comes to rap music knowledge, but I’m just going to add this little factlet to the DSN vaults. Rick Ross, raps about crustaceans. A LOT*. And after reading all these lyrics, I’m positive there is a special place in his stomach for all arthropods.

What does this dude do first thing in the morning?

…and later in the day.

Now I’m in the suites and eatin’ crab meats

do the math bucket full of crab

But don’t worry, Rick’s got a plan to cover the additional costs.

No one can resist Rick’s shrimp pimp.

Growing our business and expanding the merchandise.

Stuffed shells – thanks to crack, I crack
Crabs and lobsters, not all mobsters

Until we are an Arthropod dealing empire….

And there was commas after commas, I eat ‘em like Benihanas
Put the shrimp over the pasta, the pasta over the lobster
And the lobster over the table, power circle a mafia

…because truly, you can’t resist.

Am I really just a narcissist
Cause I wake up to a bowl of lobster bisque?

*If you want to be particular, he raps about food all the time.