Coral reefs are in crisis. They are fragile. They are complex. And they are disappearing faster than we are able to understand them.

This threat is exacerbated by an ecological battle raging on reef lines between corals and seaweeds. When fish are removed, seaweeds run rampant, and corals suffer. This negative feedback loop is often mitigated with the implementation of Marine Protected Areas (MPA).

Essentially….Save the fish, Save the world coral.

MPAs globally are established on the premise that they will not only protect critical reef habitat, but also act as a source for larval export to surrounding regions. This is known as the spillover effect and it represents a central tenet in the creation and management of these areas.

However a seminal study, out today in Science, demonstrates that coral and fish larvae can actually distinguish the differences between protected areas and degraded ones on the basis of the reef’s chemical scent alone.  Resounding larval choice for healthy reefs puts into question the validity of the critical “spillover” process for these areas. 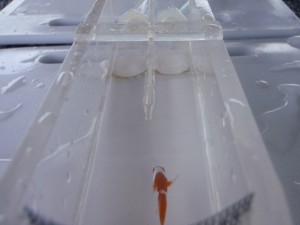 Fish in a flume deciding which rabbit hole to go down. Source: Danielle Dixon

Exploring three different marine protected regions off the Coral Coast of Fiji, Dr. Danielle Dixon and her team were able to provide outstanding evidence in laboratory flume studies for the case that when coral and fish larvae are given the choice between water taken from an MPA and that of a non-MPA (representing healthy and degraded reefs) that they will chose the former. Over and over and over again. This pattern held true for three different coral species (genus: Acropora) and 15 species of reef fish spanning multiple families and taxonomic groups.

As if that was not remarkable enough, this larval behavior is dependent on the presence of cues stemming from certain coral and seaweed species in the water. For instance, they discovered that larval fish prefer water treated with corals that are more susceptible to stress over those that are less. With presence of more susceptible corals on a reef being a good indication of a healthier area where such sensitive corals may persist. Furthermore, larvae were able to distinguish between different types of seaweed cues.  They found larvae dissuaded more by the scent of seaweeds that had a higher likelihood of blooming then those that might not necessarily take over a whole reef. A seaweed-dominated reef not exactly representing good habitat for a baby fish and especially a baby coral.

Once Dixon and Co. had discovered these trends in the lab, they wanted to corroborate these findings in the field, a truly monumental task. Using special tiles to track where larvae landed in both MPAs and non-MPAs, these researchers found that although larvae were present in the non-MPAs, they were not settling there. Conversely, larvae were found settled in abundance within MPAs.

Undoubtedly, the ability of fish to find a healthy habitat to call home is critical, even more so for corals that are unable to move after they settle.  This study is the first to establish that fish and coral larvae can smell the difference between MPAs and non-MPAs and are actively choosing to settle in a more suitable, coral-filled habitat over one that is dominated by noxious seaweeds.

Due to the fact that the reefs surrounding these MPAs have degraded beyond an unknown tipping point, connectivity between areas is minimal, and spillover does not appear to be occurring. This does not in any way mean that Marine Protected Areas are not working to their intended purpose, quite the contrary. They are most definitely effective. However, with this knowledge we are now aware that they just might not be enough. Managers must look into ways to enhance the “Call of the Reef” or the good smelling corals that attract settlers and decrease the tremulous odor of algal domination to help guarantee a better future for reefs everywhere.