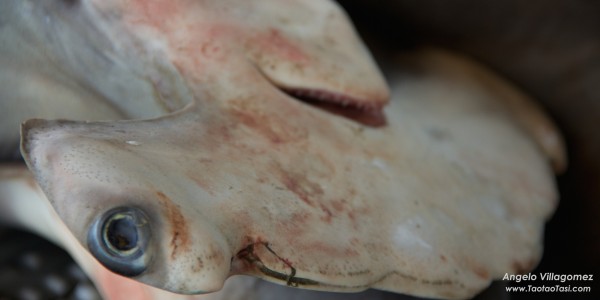 As the sun rose this morning here in Trinidad and Tobago where I’m conducting field work, I was certain about two facts.  First: Trinidadians and Tobagonians awoke to their morning ritual of doubles and a new reality with regard to their nation’s obligations on the international trade of five species of endangered shark species (Great, Scalloped, and Smooth Hammerhead sharks, Porbeagle sharks, and Oceanic White-tip sharks) as well as all manta ray species.  And secondly: I knew I could still drive this very morning (or any morning) to the public market just outside the Trinidad capital of Port of Spain and find dozens to hundreds of dead hammerhead sharks for sale.

Let’s take a look at the ocean optimism first.  As the direct result of the hard work by individuals and organizations for over a decade, the 16th Conference of the Parties (COP) for the Convention on International Trade in Endangered Species of Wild Fauna and Flora (or familiarly known as CITES) resolved in 2013 that five shark species and all manta rays were to be included in Appendix II.  As of this Sunday morning, September 14, 2014, those new rules came into effect and nations that are party to CITES must now enforce these regulations (more on what’s at stake if nations fail to take these obligations seriously in just a moment).

In the case of shark and ray conservation, the need for a body like CITES is born from the recognition of the self-perpetuating cycle of lack of information and lack of adequate management action for commercially valuable species at the local and regional levels.  This cycle has been acknowledged by many of us within the shark conservation community as the Wheel of Shame.

Although shark fishing occurs around the world, most jurisdictions lack good or reliable data on shark populations (or data is deficient for making informed decisions on sustainability).  Because of this data-poor situation, scientists cannot offer recommendations on stock assessments, catch limits, or other critical fisheries advice.  Governments tend not to prioritize or create fisheries management guidelines in the absence of scientific recommendations.  All the while, shark fishing continues unabated, species depletion continues, and the ecosystem function of having healthy shark populations in our oceans is undermined.  And around we go.

CITES works to help partially control the Wheel of Shame by subjecting international trade in specimens of selected species to certain controls. All import, export, re-export and introduction from the sea of species covered by the Convention has to be authorized through a licensing system. Each Party to the Convention must designate one or more Management Authorities in charge of administering that licensing system and one or more Scientific Authorities to advise them on the effects of trade on the status of the species.

The species covered by CITES are listed in three Appendices, according to the degree of protection they need.  Appendix I, the category with most stringent protection, includes species threatened with extinction.  Appendix II includes species not necessarily threatened with extinction, but in which trade must be controlled in order to avoid utilization incompatible with their survival.  Appendix III contains species that are protected in at least one country, which has asked other CITES Parties for assistance in controlling the trade.

At each COP, the 175-nations (or Parties) submit proposals to list species on the Appendices, remove species from the Appendices, or transfer species from one Appendix to another. Species proposals are discussed and either passed or defeated by consensus or voted upon. Each Party gets one vote. It takes two-thirds of the Parties present and voting to pass a species proposal.

Decisions to propose CITES listing is based on the best available scientific evidence on species biomass, distribution, genomics, ecological connectivity, and known threats and vulnerability to commercial trade. Consideration for CITES listing is, by mandate, to include species not necessarily threatened with extinction, but in which trade must be controlled in order to avoid utilization incompatible with their survival:

CITES RESOLVES that, when considering proposals to amend Appendix I or II, the Parties shall, by virtue of the precautionary approach and in case of uncertainty either as regards the status of a species or the impact of trade on the conservation of a species, act in the best interest of the conservation of the species concerned and adopt measures that are proportionate to the anticipated risks to the species.

Long-time readers may recall that I’ve not always felt so optimistic following a CITES meeting.  COP 15 in Doha saw Blue-fin tuna, polar bears, eight species of shark, and an entire family of red and pink corals get passed over.  Conservation work at this international level is extremely high stakes, tricky, and often (if not regularly) a quagmire of corruption, coercion, and collusion.  I’ve heard too many stories of flamboyant bribery, vote-buying, secret ballots, and eleventh-hour reversals.

Yet despite these challenges, CITES remains one of the most powerful tools in the international conservation arsenal.  Flouting CITES obligations is not a trivial matter for a Party.  And while it’s not as complete a list of shark species that I’d like to see receiving protection, the new CITES restrictions that came into effect today represents the most comprehensive global effort seen in CITES’ 40-year history to give sharks and manta rays a better chance of surviving in the wild.

WHAT DO NEW CITES RULES MEAN IN PRACTICAL TERMS?

Since participation in CITES is voluntary and each Party assumes financial and technical responsibility for their own implementation and compliance, you might think that CITES has little teeth when it comes to infractions or failure to uphold obligations.  In truth, the CITES Secretariat does not monitor international trade but  needs to be informed of an infraction by a Party before action is considered.  And if international trade in the now CITES Appendix II-listed sharks and rays is small, you might think that a Party has little to no risk in letting shark fins or manta gill-rakers slip through their borders.  But consider for a moment the full suite of CITES species a Party may traffic in their international trade, not just sharks and rays.

Infractions from lack of enforcement of any single CITES species regulation can impact all of a Parties trade in CITES species.  The language of the Convention stipulates that infractions can result in, “the recommendations to all Parties to suspend CITES related trade with the offending party.”  This means that a Party not only risks its trade in shark fin through lack of compliance in CITES Appendix II restrictions, but also its lucrative trade in exotic hardwoods like mahogany, rosewood, or ebony.  Then there’s trade in fish, invertebrate, and coral species for the multi-million dollar home aquarium industry.  Or trade in birds, reptiles, or mammals for the pet market.  And Parties also benefit financially by supplying biological specimens for pharmaceutical research.  With CITES regulatory infractions, if you’re in for a penny you’re in for a pound.

But while the new CITES Appendix II listings for sharks and rays are reason for celebration within the conservation community, our work is far from over.  Scroll back up to the top of this post and take another look at the photo.  That dead Scalloped hammerhead shark was photographed in a fish market here in Trinidad yesterday.  It was a juvenile, and it was one of many.  Today’s new CITES rules change NOTHING with regard to domestic fishing, consumption, and trade.  In a place like Trinidad, that local consumption and trade volume is not trivial.  Those endangered hammerheads will be there today, tomorrow, and as long as local and regional management recommendations are lacking.

That’s where working with local fishing communities, regional fisheries management organizations, local governments, and local communities comes into play.  Until local people recognize the importance of healthy sharks to healthy oceans, the unique life histories of sharks that make them particularly vulnerable to overfishing, and that in many cases a shark is worth far more alive than dead to local economies, this scene will continue to play out.  To date, ten nations have stepped forward to demonstrate shark conservation leadership at the local level through the creation of shark sanctuaries.  Coupled with regional fisheries reform measures, and now strengthened by the enhanced protection derived by the new CITES sharks and rays Appendix II rules, we are seeing real reason for cautious ocean optimism.