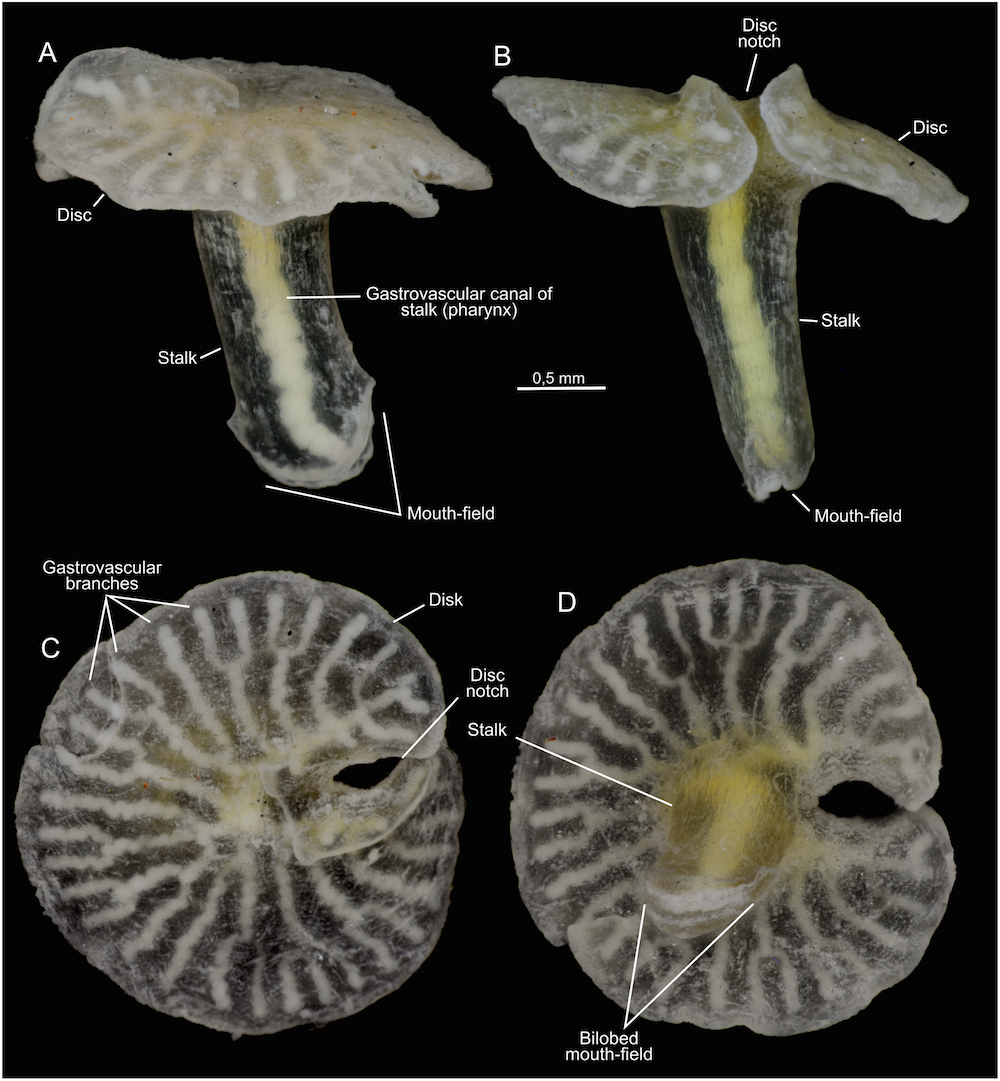 In 1986, a group of scientists from Australia and New Zealand described, in the one of the highest profile scientific journals, the existence of a new class of organisms.

During examination of echinoderms from sunken wood collected from depths between 1,057 and 1,208 m off the New Zealand coast, we discovered nine specimens of a small flattened discoidal invertebrate. These animals, briefly described here, superficially resemble a cnidarian medusa, but their pentamerous morphology is distinctly echinoderm-like. We consider that the features of these newly discovered echinoderms warrant the recognition of a new class. Xyloplax medmiformis n.gen. and n.sp. represents a radical departure in morphology from any other known extant echinoderm. Its obvious tube feet, clearly pentamerous body pattern, and calcite skeleton leave no doubt that the animal is an echinoderm. However, its concentrically arranged skeletal structures and single series of tube feet arranged in a ring are novel. The water vascular system of Xyloplax consists of a double ring of canals which service the tube feet in inter-radial positions; in all other living echinoderms the vascular ring (circum-oral) is single, and the tube feet are serviced from it in radial positions. These specimens represent the first new class of living echinoderms to be described since 1821.

The authors describe Xyloplax, a bizarre looking echinoderm. So different from other echinoderms in fact, that the authors advocated erecting a new class to put them in.  To put this in perspective, imagine you are in the forests of Bornea. You come across an animal that you can clearly see is a vertebrate but it is not quite bird, mammal, amphibian, or reptile, which are all taxonomic classes, but something wholly different.  This is exactly what the Xyloplax authors proposed.

Just two years later, another group of scientists argued that Xyloplax did not need a new taxonomic class and was just a unique, albeit very unique, type of starfish or Asteroid.  Genetic evidence later put the last nail in the class coffin for Xyloplax.

we show that rather than representing an ancient distinct lineage as implied by its status as a class, Xyloplax is simply a starfish that is closely related to the asteroid family Pterasteridae.

The anatomical strangeness of worm-like creatures around hydrothermal vents, particularly the large Riftia pachyptila, demanded a new phylum—the scientific equivalent of dropping a nuclear bomb on taxonomy.  Imagine your are again in the forests of Borneo and what you discover is neither mollusk, sponge, arthropod, or basically any other form of described animal.  However by 1993, we realized those worm-like creatures at vents are actually just worms.

This result is convincing evidence that Vestimentifera are protostomes that are closely related to Annelida. The ML tree suggests that Vestimentifera are more closely related to Polychaeta than to Oligochaeta, though the data were not sufficient to discriminate these three groups at a significant level. From recent evidence such as morphological characteristics and molecular information, it may safely be said that vestimentiferans should be included in the Annelida provided this phylum contains polychaetes and oligochaetes.

The theme among these stories is that bizarreness in anatomy and deep-sea creatures is like saying this salt is salty.  Most of these animals are just highly modified organisms, of known groups, adapted to live in the environmental extremes of the deep oceans.  Carnivorous sponges anyone?  Iron pyrite snails?

So with my skeptical hat on I read the recent paper on Dendrogramma from Just and colleagues. Dendrogramma from the deep ocean (400-1000 m) off Australia is indeed a bizarre animal.  The newly discovered animal is mushroom-shaped resembling in some sense both Cnidarians, i.e. jellyfish, corals, anemones, and Ctenophores, i.e comb jellies. However Dendrogramma lacks the single defining characteristic of either of these phyla.  Cnidarians all have cnidocytes, specialized stinging cells.  Ctenophores all have comb rows, or groups of cilia, used in proposulion.  There is no evidence that Dendrogramma has either.  Because of this, this newly discovered animal is officially listed as incertae sedis among animals—literally Latin for “of uncertain placement” or the scientific equivalent of “f**k if we know.”

The million dollar question thus is Dendrogramma a whole new, previously undescribed phylum, or does this new animal ultimately require us to alter our definition of either Cnidarians or Ctenophores?

In this age of genetics a question that can be easily addressed, except…

The resulting material was bulk fixed in neutral (Borax) formalin.

Formalin is a great preserver of animals turning a squishy invertebrate into a near rock hard specimen.  However in the process of this preservation the DNA gets chopped up into small fragments.  It is very difficult to pull DNA from formalin fixed samples and assemble those small sequences into a longer and understandable sequence, but quite clearly not impossible.  The fact that this was not attempted is my greatest frustration with the paper.  To be clear my criticism is not that the authors tried and failed (which there is no indication they did) but that this was never attempted.  Given the fundamental importance of what the paper implies about the evolution of life this hole is alarming.

This complete lack of evidence that Dendrogramma represents a new major division of life did not stop anyone from claiming as such. 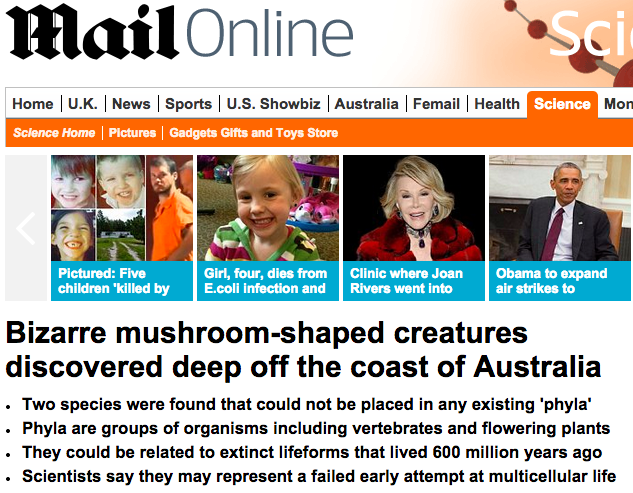 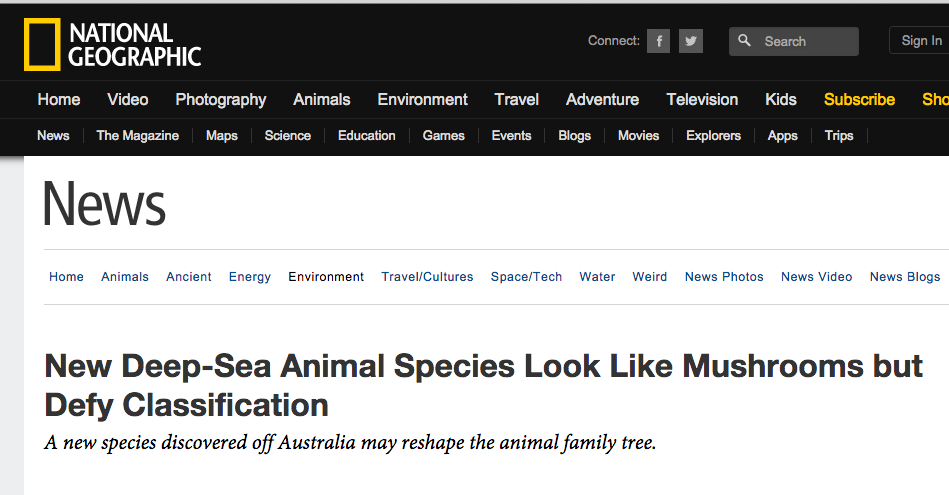 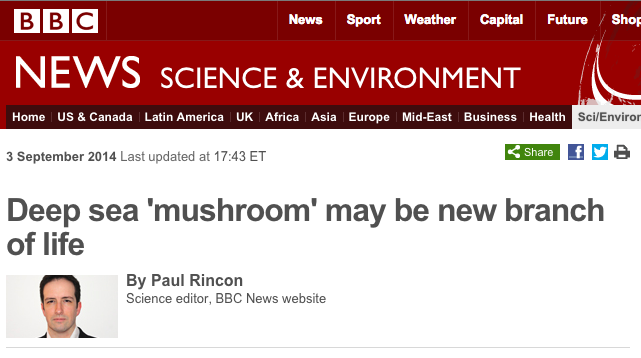 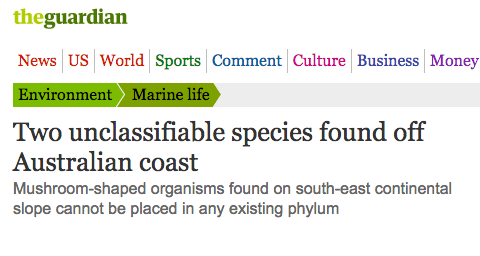 And herein lies the problem.  The study, and claim, are incomplete. In a simpler and tastier case, this morning a dozen donuts were in residence at my center.  From the shape of two donuts of the dozen, I know they are filled.  This is based on a generalization I’ve made based on extensive sampling of filled donuts in the past.  At no time have I cut one of the current donuts in half and conducted visual or gustatory sampling.  However, without this data I proceed by stating that the filling of the donut cannot be fit into any known filling category.  Not cream or fruit or chocolate or custard.  Nothing.  Clearly this would be absurd.  And this is why I am concerned.  With the extraordinary claim of a new phylum should come great evidence, because the most parsimonious is that the new creature is a highly derived species of one of these groups, with reduced or lost features.

Comments on the article also note several other issues with the paper and many are unconvinced because of the lack of genetic and more thorough anatomical analyses, i.e. histology, that these are indeed something new.

These organisms are a very exciting find, but on first reading I’m concerned about two points where I feel much of the discussion of their phylogenetic affinities and implications may be premature. Firstly, it is not clear to me why they are emphatically described and classified as non-bilaterian. The overall shape of disc and stalk in the illustrated specimens looks bilaterally symmetrical, and the only point of exception seems to be the junction of the stalk’s gastrovascular canal with the branching canals of the disc. Secondly, the absence of any gonad-like structures or primordia suggests that these specimens are not be adults (allowing for example the possibility of substantial change in morphology and lifestyle, including for example possible presence of cnidocytes or collocytes in adults only), and they may not even be part of a sexual segment of the organism’s lifecycle if it were to combine alternate morphologies with alternate reproductive strategies (allowing for example the cnidarian-like possibility of these specimens being a semi-sessile form that reproduces asexually through budding or fission, while a substantially differently structured sexual form may develop at some point, become much more motile and inhabit a substantially different environment with different feeding behavior etc).

Just from the look of the creatures, could they be very derived Platyhelminthes? A marine form with a large evertable pharynx might look like that if it was fixed. The Platyhelminthes have a blind-ended multiply-branched digestive system, which is what the pictures instantly reminded me of. Although turbellarians are bilaterally symmetrical, secondary modifications may make the symmetry less apparent, resulting in a small roundish flatworm with a large pharynx, resembling a “stalk” on a mushroom.

I raise these because, as pointed out to me by taxonomists online, it bares a striking resemblance to the sea pansy, Renilla.  Of course without DNA, yes that dead horse that I continue to beat, none of these hypotheses have any more evidence than the new phylum scenario…however they are simpler explanations via Occam.

I am not sure how the lore of a new phylum started.  Note the authors state in the paper,

It has been suggested during review that Dendrogramma could represent a new non-bilaterian phylum. While we may agree, we refrain from erecting such a high-level taxon for the time being, because new material is needed to resolve many pertinent outstanding questions… It is therefore possible that Dendrogramma may eventually find a phylogenetic position as closely related to one of these phyla (e.g., as sister group)…

The press release seems to be more strongly worded

Jørgen Olesen added: “New mushroom-shaped animals from the deep sea discovered which could not be placed in any recognized group of animals. Two species are recognized and current evidence suggest that they represent an early branch on the tree of life, with similarities to the 600 mill old extinct Ediacara fauna.”

This raises numerous questions about the nature of scientific publication and the media. Should this paper have been published? Did the authors find the appropriate line in conveying the excitement of the finding while being reasonable about the limitations of their data?  What role do the authors have shaping the media portrayal of their research?