So this little gem came across my Google alerts today.

The cognitive dissonance between what happens (biologically) in that video, what the two intrepid heroes do, and what’s reported, fills me with dismay for society.  If that seems hyperbolic, bear with me.  Let’s break it down:

What the story says

Benchley-esque narrative: blah blah “terrifying moment”, “heart stopping”, “full force”, “massive beast”, “shouting in terror”, “inches from the shark’s jaws”, “brunt of the assault” blah blah.  The only kernel of truth is the very last sentence “the whale shark is only known to eat small fish and plankton and have never been known to harm or kill a human”  Talk about burying the lede…

Two RealMenTM are spearfishing in the pelagic zone.  You know, where whale sharks live.  To aid in their quest to bag a tuna, our intrepid heroes chum the water with a bag of cut fish.  One curious tuna flirts with death, but is saved by the arrival on scene of a harmless and curious whale shark: as I said, a well known inhabitant of the pelagic zone and commonly associated with tuna schools.  Also, and this is important, with an impeccable sense of smell and a fairly sizable appetite.  So, whale shark arrives to investigate the source of that delicious smell, giving Hero number 1 a nudge during his sniff test.  Hero number 1 then screams like a horror film teenager.  Hero number 2 decides not to take that kind of crap from no stinking planktivore, so he grabs the animals dorsal fin for a ride, in violation of pretty much every tenet of wildlife interaction.  Doing that would and should get you summarily expelled from any well managed whale shark ecotourism operation in the world.  Animal objects and banks away to avoid the irritation.  Aaaaaand scene.

So to recap, our two heroes created a situation by going into the whale shark’s habitat with a bag of what the whale shark likes to eat.  A whale shark shows up (duh), doesn’t hurt anybody because they don’t, but gets harrassed anyway, and then journalist (that’s Kara O’Neill at the Mirror) beats it up into some sort of horror story in a case of victim blaming par excellence.  Let me tell you, if that’s a horror story, then I’m Rob freakin’ Zombie, because I’ve got several similar videos (sans the harassment of course).  Every time there has been physical contact between me and a whale shark it’s because I was too stupid or not quick enough to get out of its way; this is an animal the size of a school bus and you need you have your head on a swivel.  Hero 1 did not, got bumped, but no harm no foul because the critter is intrinsically harmless.  The real foul here is how the incident is portrayed, and that’s what fills me with dismay.  How are we ever supposed to get folks to understand, ergo care for, ergo protect marine life if we keep trotting out rubbish like this?  The two guys in the video should be ashamed, and so should everyone involved at The Mirror. 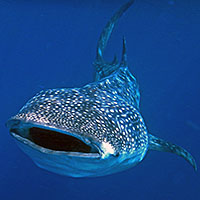