Biomixing, where the ocean is mixed by swimming animals, has long been a hot topic in oceanography. Some people think all that biological flapping and stroking could be a major source of oceanic turbulence. Others, not so much. But a new laboratory study by M. Wilhelmus and J. Dabiri from Caltech is certainly going to ignite scientists love of arguing about these kinds of things.

The concept of sea beasties as ocean swizzle sticks has been around for a long time. But most studies found the turbulence produced by animals was small and probably insignificant. Biomixing was even mentioned in Walter Munk’s 1966 seminal paper Abyssal Recipes, but he really had no idea how to estimate how much animals really stirred the ocean so he just ignored it.

That changed in 2005, when a bunch of scientists from the University of Victoria deployed their fancy turbulence detecting instrument at dusk into a swarm of upward swimming zooplankton*. Everyday zooplankton participate in a phenomena known as diel vertical migration, heading to the surface when the sun sets and descending to the dark depths when it rises again. It was during this upward vertical migration, that researchers observed some big ass turbulence, nearly 100 to 1000 times larger than what is usually seen in the ocean. Since this daily migration in the largest in the world in terms of the net biomass alone, this suggested there could be a significant amount of unmeasured biological mixing all over the world’s ocean.

Of course this got scientists all excited…because OOH BRIGHT AND SHINY NEW TURBULENCE! There were studies on mixing by algae, nekton, paramecia, jellyfish, and even whales (which I am not citing because I think the analysis is flawed). And there were dissenters as well, arguing that the turbulent eddies formed by zooplankton are too small to create any globally significant amount of mixing. It was a good ol’ fashinoned biomixing science brawl.

But one thing all these studies had in common is that it is really hard to measure turbulence, AND it is even harder to measure biomixing because animals have behaviors such as naughtily swimming away from boats with turbulence profilers. In this new study, the researchers basically decided TO HELL WITH THE SEA. We’ll just make our own mini-sea and populate it with vertically migrating zooplankton. In this case the sea is a tank, the zooplankton are brine shrimp from Sea Monkey kits, and the sun a frickin’ laser beam. The brine shrimp were coerced to swim to the surface as a swarm with an orchestrated laser light show (manuscript did not indicate whether the accompanying soundtrack was pink floyd or gorillaz). Currents produced by the upward swimming brine shrimp were measured by a technique called Particle Image Velocimetry (PIV). That’s just a fancy term for saying we seed the water with lots of little shiny spheres, take lots of pictures, and track their whirly paths from one frame to the next to calculate current speeds.

COME TO THE DARKSIDE ZOOPLANKTON.

When the researchers looked at a single brine shrimp, the eddies it created were sized as predicted: about the length of one of it’s flailing appendages. But when you have a cloud of brine shrimp, the tiny currents each beastie makes interacts with each other creating a complex flow field, including a downward squirt of water. Instabilities along this jet that then creates these eddies that are now much larger than the brine shrimp. In other words, to get big turbulence you need a party! 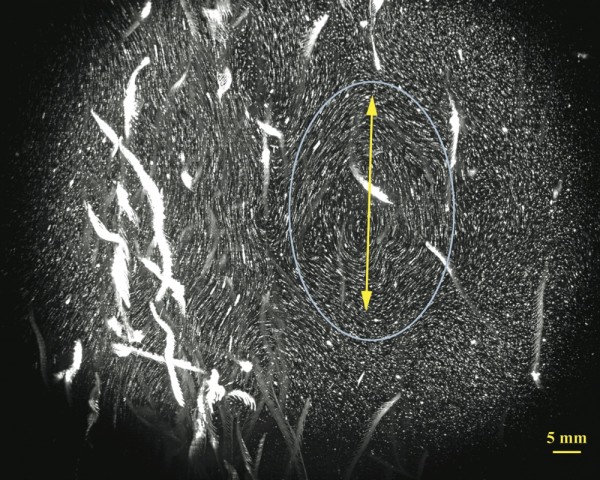 Mr. Bigstuff, whose eddies are so large.

Eddies larger than the size of the migrating zooplankton had been observed during that first study in Victoria, but it wasn’t until this tank experiment that researchers understood why. It’s hard to find a clump of vertically migrating zooplankton to repeat the initial experiment in the ocean. And computer models only looked at lone swimmers because it’s computationally expensive to model a clump of swimmers, so they didn’t find big eddies in their simulations either.

In the university press release the authors estimate that vertically migrating zooplankton input as much energy into the ocean as winds and tides, but I am a bit more skeptical about this number because this experiment doesn’t address that. That estimate comes from a previous study and isn’t well constrained, it was more of a deliberately provocative thought experiment with big uncertainties. There are also other factors that could lessen the effect of biomixing by vertically migrating zooplankton. Zooplankton hang out in the upper ocean, so this doesn’t do anything in the deep ocean. Ocean water is stratified (made up of layers of water with different densities) which suppresses eddy size, while this experiment was done in unstratified fresh water. And maybe the flow fields created by other schools of ocean animals don’t make the same supersized eddies.

That being said, this is still a neat little experiment that shows biological mixing can be bigger than expected. Do they drive ocean currents? Sort of. The observed mixing definitely moves water vertically and ocean currents are sensitive to the magnitude of mixing. The patchy nature of zooplankton means that in some places and at some times, biomixing can have a big impact. Half the fun is figuring out where that is!

*The lead author of this study E. Kunze was on my Ph.D. thesis committee, a coauthor on some of my papers. and an all around helpful guy.

Do fish stir the ocean?