The following post is by Luiz Rocha, Associate Curator and Follett Chair of Ichthyology at the California Academy of Sciences. His major research interests include evolution, conservation, taxonomy, and community ecology of coral reef fishes.The overall objective of this interdisciplinary research is to test existing hypotheses (and propose new ones) about what generates and maintains the extremely high biodiversity in tropical coral reefs.  He has spent more than 5,000 hours underwater collecting and observing fish, and published more than 70 peer-reviewed articles. In addition, Dr. Rocha’s work has been featured in many popular media outlets including the New York Times, Scientific American and National Geographic magazine, and supported conservation efforts across the globe. His twitter handle is @CoralReefFish and website is http://www.luizrocha.com/academic/ 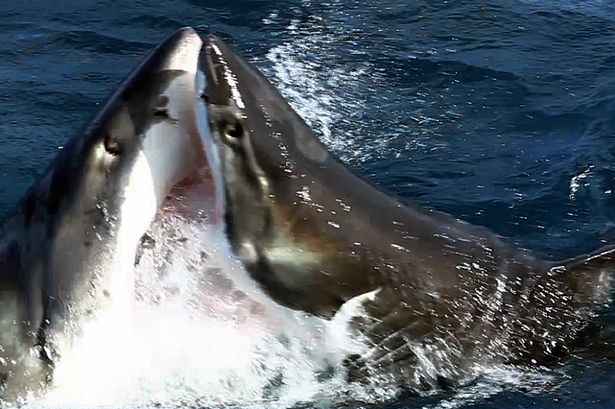 Over the past couple of days a video portraying a seemingly “brutal battle” between two Great White Sharks went viral. I tend to avoid following links with such sensationalist claims, but the video was shared with me in Twitter, Facebook and Google+ so many times that I had to check it out.

When I actually took the time to watch the video, I noticed that in reality nothing remotely close to a battle takes place.

But if not a battle, what exactly is going on? It’s quite simple, both sharks are going after the bait hanging behind the boat at the same time, and the small shark is simply in the wrong place at the wrong time. What do you think would happen if you tried to feed two wild bears in Yosemite with a big juicy steak at the same time? Or even two dogs that don’t know each other? Of course sparks would fly, so I think you get the idea.

It is really hard to tell what the final outcome was, but it is not very likely that the large shark ate the smaller one. Amazingly, that’s exactly what a lot of the news articles claim, and one goes as far as claiming that this might explain what happened weeks ago when a possible predation of a Great White Shark was documented.

To make matters worse, many such articles portray the Great Whites as “vicious sharks” with “massive jaws” and “razor sharp teeth”. This only contributes to the negative public perception of sharks in general and Great Whites in particular, and is especially damaging because Great Whites are listed as vulnerable in the IUCN Red List and need our help to survive (or at least need that we leave them alone). There is no doubt in my mind that this “brutal battle” wouldn’t have happened without human intervention, so here are a couple of more realistic headlines: “Shark feeding by humans causes sharks to attack each other”; “Endangered species of shark forced into battle by human feeding”.

2 Replies to “Brutal Battle Between Great White Sharks? Not really, no.”