Artist Jason deCaires Taylor has teamed up with B.R.E.E.F. to create “Ocean Atlas”, the worlds largest underwater sculpture. Underwater reef, diverter of tourists from natural reefs and a new hub for underwater selfies, “Ocean Atlas” is a sculpture of a woman supposedly holding the weight of the ocean on her shoulders. Which of course led my tiny science mind to wonder…exactly how much weight IS she holding? 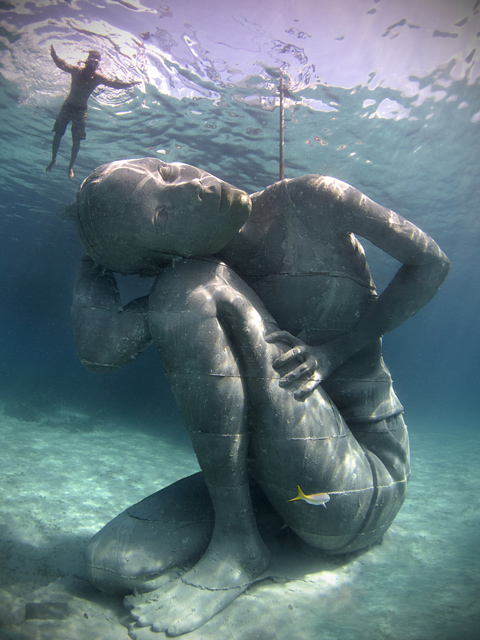 To make that calculation, we need two things: The volume of water above her shoulders and the density of the seawater.

I couldn’t find any reliable estimates of the size of the sculpture and water depth, so we are just going to have to eyeball it using that puny human in the photo above for reference. Let’s say the distance from the sea surface to her shoulders is about 1 human and she occupies a 2 human by 2 human footprint on the sea floor. If a typical human is about 1.6 m tall then she is holding an imaginary box of water sized 1.6 m x 3.2 m x 3.2 m or a grand total of 16.4 m3 of water above her. 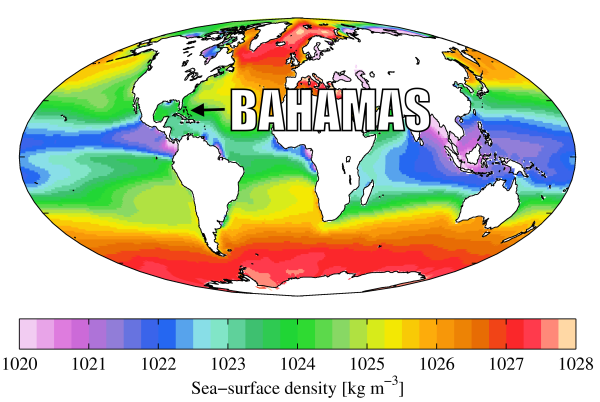 The Bahamas, Home to beaches, big blue holes and seawater with an average density of 1024 kg/m3

After a brief consultation with the World Ocean Atlas, I found density of seawater in the Bahamas is pretty average, about 1024 kg/m3.

Density is merely Mass divided by Volume, so plugging in all that information we find the weight of water above this “Ocean Atlas” is 16,777 kilograms or about 16 tonnes.  When you compare that to her actual weight of 60 tons, that is only about 27% of her total body weight. It’s the equivalent of me hoisting a 5-gallon bottle too refill the office water cooler. Sort of disappointing when she is SUPPOSED to be carrying the weight of the oceans.

Then how deep would she have to go to carry a really impressive amount of water on her shoulders? In 1962, Paul Anderson made the Guinness Book of World Records by lifting 6270 lbs or 19 times his body weight. Relatively speaking, Lady “Ocean Atlas” would have to lift 1140 metric tons to rival that. That’s equivalent to a medium sized research ship or relocating her to water that is 109 m deep. Of course you could no longer reach her via snorkel or scuba (perhaps with an epic free dive but you would only glimpse her for a second). Thanks, but I’ll pass on the superhuman feats and just take a fun piece of ocean art that raising awareness and helping local reefs.