This is a guest blog from Luiz Rocha, curator of Ichthyology at the California Academy of Sciences.  Luiz gets to do some amazing work documenting fish biodiversity around the world.  The Academy’s Philippine biodiversity expeditions have become an extraordinary collaborative enterprise that marries the best of biodiversity research and technical diving in the heart of the coral triangle.

If you can think of anything involving sex, from group sex to monogamy for life to males with penises on their heads, you can probably find good examples in fishes. Here I want to focus on a particularly interesting and bizarre aspect of fish sexual life: sex changing! Hermaphroditism (the expression of both female and male reproductive organs in the same individual) in fishes can occur in many ways, but most commonly, a fish starts off as one sex, and changes to the other at a certain stage in life (sequential hermaphroditism). A change from female to male is called protogyny (from the Greek “proto”=“first” and “gyno”=“female”), and a change from male to female is called protandry (from the Greek “proto”=“first” and “andros”=“male”).

Wrasses are well known for their sex changes, which are usually accompanied by dramatic color changes, and most are protoginous hermaphrodites. But unlike our own species, where girls dress to impress, in wrasses it’s usually the opposite: males are the ones who put on the fancy dresses.

A pair of the protogynous hermaphrodite Coris atlantica (female on the left).

In these fishes, sex change is controlled socially: a dominant male usually controls a harem of females, and when the male dies the most dominant female in the harem becomes a male. Sex change happens in stages. First, just a few hours after the male goes missing, the dominant female starts behaving as a male. This behavioral change triggers hormonal shifts that cause her gonads to become male gonads and her colors to change into male colors. The entire process is completed in just a few weeks.

Clownfish of the genus Amphiprion (made famous by the movie “Finding Nemo”) are great examples of protandrious hermaphrodites. The movie “Finding Nemo” (which had clownfish as stars) is biologically inaccurate in many ways, but for the purposes of this article, let’s just say that to be biologically correct, Marlin (Nemo’s dad) would have to start behaving as a female just a few hours after Nemo’s mom was eaten by a barracuda. You can only imagine what conversations between Dory and Marlin would be like if the movie script had followed this more accurate sequence of events.

However, differently from wrasses, clownfishes don’t keep harems, rather, a single pair of breeding adults (with a female usually much larger in size) dominates an anemone that can also host several immature clownfish. If the dominant female dies, the male changes into a female and the next immature clownfish in the social order becomes a male to form a new breeding pair. 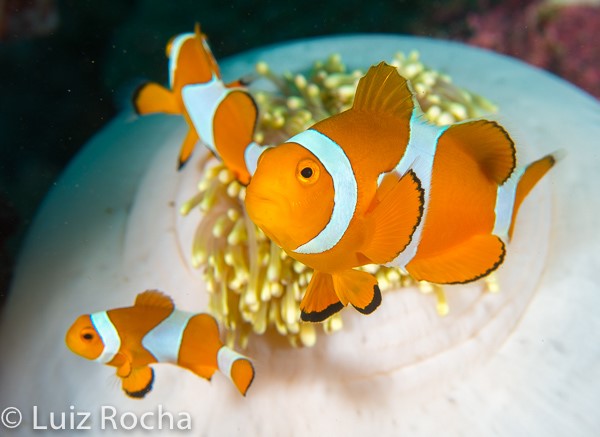 If you thought that it was cool for wrasses and clownfish to be able to change from one sex to the other, you are in for a treat now. Perhaps one of the most amazing and shocking sex lives in fishes is found in Caribbean Hamlets. They are simultaneous hermaphrodites, which is to say that every individual is both male and female at the same time. But to avoid self-fertilization (which is bad because it decreases the genetic variability of the offspring), they trade roles in a strategy known as “egg trading”. After meeting in the same familiar spot in the reef (let’s call it the “bedroom” rock), the pair of hamlets rises in the water column and a mesmerizing spawning event happens: the fish acting as a male embraces the one acting as a female while releasing sperm, and the fish behaving as a female releases eggs. The embrace lasts a few seconds and the pair goes back down to the reef. A few minutes later they rise again, but now the roles are reversed! This fantastic courtship and spawning behavior is easy to observe in shallow reefs of the Caribbean and happens every day during a very romantic time (just before sunset).

From reading this article you might think that we know a lot about sex-changing in fishes, but in reality we have just scratched the surface. For example, in a recent paper, Kuwamura and colleagues showed that male cleaner wrasses (which are born females and change into males) can change back to females when there are only males in a group. This gives an entirely new meaning to the word “options”!

One Reply to “Male, female, or both? When it comes to sex, fishes do it all!”