There is a common saying amongst oceanographers, “if you put something in the water, there is no guarantee you will get it back.” I’ve been in that situation before and it sucks. Unlike these guys, I’ve never had to actively fight the ocean to get an instrument back. 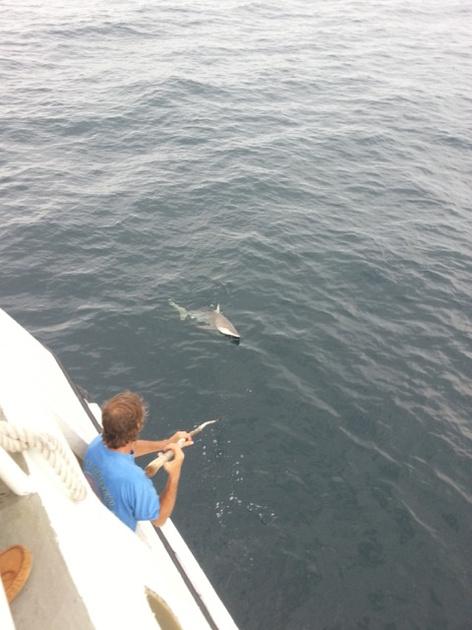 What appears to be just ordinary shark fishing is actually an unusual battle between man and shark. The prize: an orange CTD so small that it can be deployed with only a fishing rod. Whilst the researcher was earnestly making an academic study of the  vertical structure of temperature and salinity in the ocean, the shark said “F’ that, I’m bobbing for some nerf footballs” and proceeded to chomp down on the hapless little instrument.  This description of what happened is just perfect science deadpan.

“We were out on an eight day scallop project cruise during which time during a routine cast our castaway was swallowed and run out by a shark. We fought it on the line for 20 minutes but it broke free. We immediately rehooked the shark but it again broke a second line. All previous casts had been without incident.”

I am going to assume the shark was giddy with victory after “the incident” and did a deep sea touchdown dance afterward.

Sharks do have a penchant for munching on oceanographic instruments, but the noms are usually limited to exploratory nips. So it’s not surprising that a shark attempted to taste the CTD, as the location of the snatching is known by local fisherman to be extra sharky (check out all the sharks in this underwater video taken by the same researchers there several days later too!). But after emailing shark scientist David Shiffman I found out that it is unusual for a shark to have held onto a non-edible object for that long. 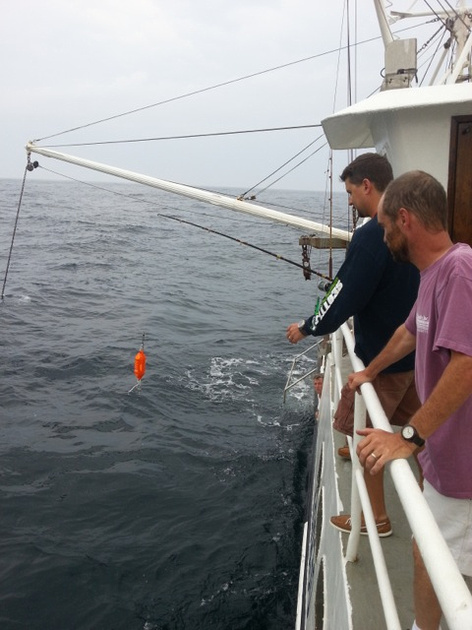 The CTD during happier days.

One possible explanation is that this shark was attracted to the electric field emitted by the conductivity sensor in the CTD. Sharks use electrolocation to hunt, sensing the weak electric fields that are generated by the nerves and muscles of other organisms. Since this is one of the rare pieces of oceanographic equipment it could actually swallow whole, I’m gonna guess that it mistook the mess of electronics for struggling prey. Anyone want to donate a spare YSI Castaway to test my hypothesis?

* Thanks to the taker of the pics and the previous owner of the CTD Art Trembanis at the University of Delaware. H/T Jen Biddle for the link to the pics.