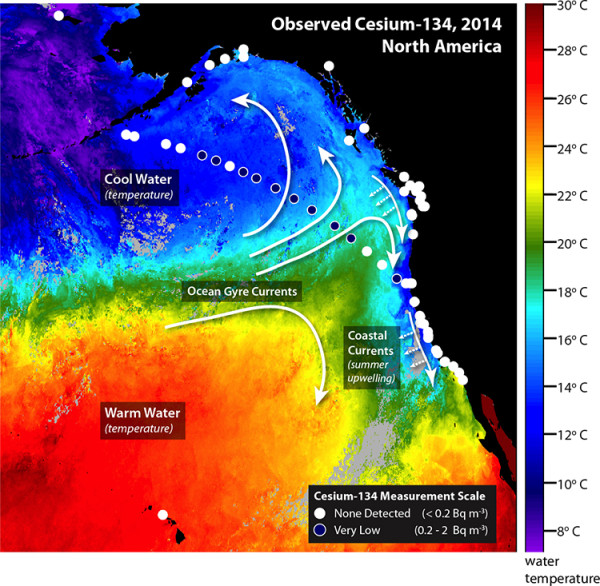 All those blue circles, where just detectable amounts of Fukushima radiation have been measured in 2014. All those white circles are where Cesium-134 from Fukushima has not been detected. [source: http://www.whoi.edu/news-release/Fukushima-detection]

The latest results from the Fukushima radiation citizen science project Our Radioactive Ocean have just been released. NO Cesium-134 has been detected on West Coast shores, but it has been detected nearly 100 miles off the coast of Eureka, CA. While this may seem worrying to some, it should not be. The amount of Cesium measured in the water has concentrations 1000 times less than the EPA’s safe drinking water standards. It’s detectable, but harmless. Bottom line: no need to freak out people. It’s here, it’s small and it’s not going to get to harmful levels.

Fukushima is still a disaster for Japan. They will be cleaning that s**t up for the next 50 years. But radiation from Fukushima is NOT a problem for the West Coast or the Greater Pacific and will never be.

You can find additional information about current Fukushima radiation monitoring efforts at Our Radioactive Ocean, Fukushima Inform and Kelp Watch.

*Cesium-134, with its relatively short half-life of two years, is the tell-tale marker that scientists use to distinguish Fukushima radiation from radiation put into the ocean from nuclear bomb testing in the 50’s and 60’s.