Saint Brendan of Clonfert is often referred to Brendan the Voyager. He is Irish monastic saint born in 484 in Ciarraighe Luachra, near the present city of Tralee, County Kerry and died in 577. Besides founding several monasteries across Ireland, Brendan made a legendary journey.

The tale of begins with Brendan and 60 (other stories range from 15-150) pilgrims making their way to The Isle of the Blessed or Paradise across the Atlantic Ocean searching for the Americans around 512-530 AD. Brendan was originally motivated by stories of this strange and distant land from another Irish monk. His boat was built of oak bark with tanned ox hides stretched over a framework of ash. Of course, as any good story there are many trials and tribulations including landing on an island that turns out to be a large sea monster. After wandering for 7 years they finally reach the blessed island covered in flora.
Now St. Brendan is the patron saint of sailors, mariners, boatmen, navigators, travelers, older adventurers, and whales. I hope this list also includes oceanographers as I have several research cruises this fall. 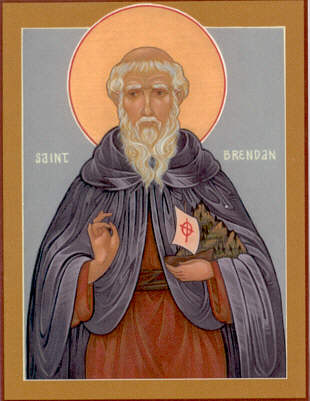 If you have a chance check out some of the wonderful imagery associated with St. Brendan.

One Reply to “The Patron Saint of Marine Scientists”