Through its influence on atmospheric circulation, [the ozone hole] has helped to shield the Antarctic continent from much of the effect of global warming over the past half century. (Robinson & Erickson, 2014)

That’s not a sentence I expected to read in a scientific paper. Most of us probably don’t think about the ozone hole that much anymore, except maybe to remember to wear a bit more sunscreen if you’re on vacation in Australia. But a new review paper – a really phenomenal paper by Sharon Robinson and David Erickson – lays it all out on the table and drops the mic. 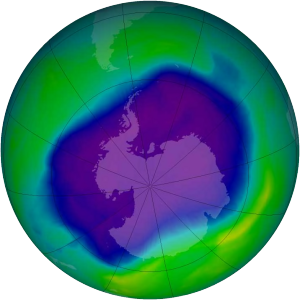 Ozone hole over the South Pole, Sept 2006 (image from Wikipedia)

The ozone hole lets in more UV radiation, sure. But this existence of this gaping hole also has a HUGE effect on the climate of the entire Southern Hemisphere, affecting wind circulation, ocean currents, and precipitation. This paper argues that we really haven’t payed enough attention to these seemingly dire climate shifts. For example:

These are just some of the most important take home points from my perspective as a marine biologist – there are many more, including climate and food security implications for South America, Africa, New Zealand, and Australia. The paper is an extremely compelling read, if only because:

Changes to wind speeds, water temperatures and ocean overturning likely have [biological] impacts on ocean ecosystems…it could mean that ozone effects on wind patterns are as important to marine food webs as [UV radiation]. (Robinson & Erickson, 2014)