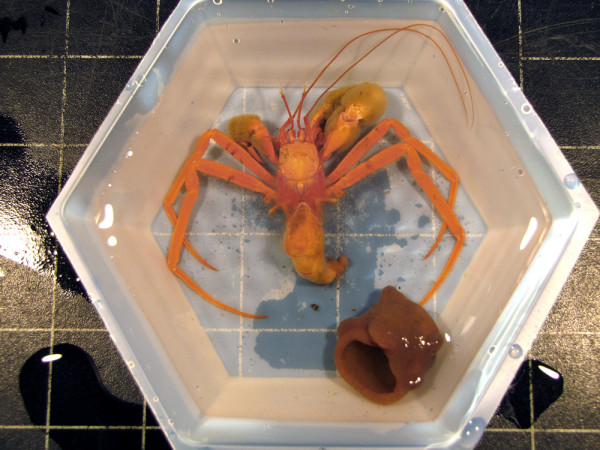 A specimen I collected with Lonny Lundsten on the Taney Seamounts at 2500m.

Hermit crabs are generally awesome. They use snail shells, and sometime shells of other mollsucs, to protect their non-skeletonized squishy backends. Some are even adapted to live in burrows coral, wood, and old worm tubes, again to keep those soft rear ends protected. But one group of hermit crabs does something colossally different and it requires a special friend—one just as soft and squishy as its derriere.

Anemones hitching rides on shells, including those occupied by hermit crabs, is nothing new. But what if no shell is present? In the hermit crab genus Sympagurus, species have symbioses with Cnidarian species of anemones and zoanthids. These squidgy cnidarians build a pseudoshell. Basically the anemone contorts itself into a shell, spiral and all. How do they do this?

An actual snail shell existed at one point. In examining Sympagurus, remnants of snail shell still remain suggesting that the anemones and zoanthids get an early start on the small shells. Overtime these cnidarian colonies grow. The corkscrew shape of the hermit crab’s abdomen, so shaped to fit perfectly into the spiral of the snail shell, guides the growth of the cnidarian colony to form the pseudoshell.

Figure 2 from Schejter and Mantellato 2011—Examples of shell-like structures constructed by zoanthids. The shape of the colony seems to be slightly different depending on the shape of the snail. Scale = 40 mm.

But wouldn’t it all just be easier for these hermit crab’s to use a snail shell. Most Sympagurus species are found deep. As I have mentioned before, the limited food of the deep-sea oceans miniaturizes animals including snails. Moreover, in the deep sea, because of the cold temperatures and high pressures, calcium carbonate, the building block of shells and exoskeletons in general, goes into solution more readily than it comes out. In other words, in the deep-sea calcium carbonate shells readily dissolve and so snails must actively maintain their shells. If there is no living snail, as in the example of a hermit crab inhabiting the carcass shell of snail, then it will dissolve leaving the hermit crab with no home. It would constantly be searching for a new home.

A soft squishy cnidarian may not be the suit of armor that snail shell is but a thick coat is better than nothing to protect their little crustacean arses.