Imagine you are yodeling whilst snowshoeing in a majestic mountain range. All of a sudden you hear a rumble. You look up to see a white wall of snow heading towards you. You, unfortunately, are about to be engulfed by an avalanche.

Now imagine you are an ROV sampling whilst exploring in majestic submarine Mendocino Canyon. You see a brown wall of poo-colored water heading towards you. You, unfortunately, are about to be engulfed by the undersea version of an avalanche: a turbidity current.

In case you can’t really imagine exactly what that means, here is that ROV just sciencing along in Mendocino Canyon in normal conditions.

Nothing to see here but some ripples in the seafloor

Now here’s that same ROV inside the turbidity current.

YE GODS. I HAVE ANGERED THE SEA GODS WITH MY SCIENCING.

Turbidity currents are ridiculously fast, bottom-trapped currents that flow down steep ocean slopes. They are turbulent: the currents inside them are a mess of chaotic eddies and turbid: filled with sediment. In the GIF above, the billows and eddies are the turbulence, the poo-color is sediment. Sediment can be made up of a variety of things: mud, sand, tiny rocks, big rocks, boulders, dead plants and animals, and even animal poo. Thus the poo-color.

Turbidity currents are both turbulent – full of chaotic eddies and turbid – full of sediment.

While it’s the turbulence that causes the turbidity currents surface to form gorgeous undulations, it’s the sediment that makes them flow. Turbidity currents are gravity currents, driven by gravity pulling a heavy sediment-laden density current down a slope through lighter sediment-free water around it.

All it takes to form a turbidity current is a jostle of the seafloor by either an earthquake, landslide, submarine with obnoxiously loud subwoofers or even pulses of river outflow. Murky sea floor goo becomes suspended in the water. The goo makes the water denser and heavier. Then the goo-filled water flows downhill picking up speed until it becomes a turbidity current.

Just like avalanches, turbidity currents are incredibly fast (up to 60 miles per hour!) and have been known to take out anything that gets in their way. After the Grand Banks earthquake in 1929, a turbidity current proceeded to sequentially snap a submarine telegraph cable in 12 places as it hauled ass down the continental slope. GET THE HELL OUT OF THE WAY FISHIES.

While the dance of 1000 turbulent billows may just look like a pretty side effect, they are important for turbidity current growth and death. The billows sour the seafloor, scooping up sediment into the turbidity current in a process known as entrainment. With more sediment, the current becomes bigger, denser, faster, and even more turbulent. MOAR turbulence -> MOAR turbidity -> MOAR speed ->MOAR turbulence. It’s like a perpetual motion machine of turbid turbulence. But eventually all turbidity currents must leave their slopey racetracks and die on the flat plains of the deep ocean. The current slows down, the billows start to fade and all that sediment is deposited on the seafloor again. 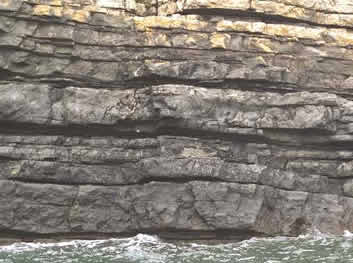 The remains of turbidity currents of yore in Ireland.

To my knowledge, this is a pretty unique video because turbidity currents occur intermittently and are rarely observed (because they’ve probably trashed your instruments as they went by). But in geological time, turbidity currents occur pretty frequently because we can map and date their remains, turbidites (That’s turbidite with a b, not to be confused with the turdidite your coworker forgot to flush). As the turbidity currents flows downhill it not only entrains sediment, but it also deposits sediment on the seafloor. Like a slug, the turbidity current leaves a tell-tale trail behind it made up of pebbles, silt, sand and probably some slime that is really hard to get off your hands. Slice through the seafloor and you can see hundreds and even thousands of these trails layered on top of each other stretching out over hundreds of miles.

It’s notoriously hard to put in moorings in Monterey canyon because turbidity currents have a penchant for ripping them from the sea floor. The fact that this ROV got caught in one and managed not only to survive but also keep on sciencing in the process is pretty badass. I’m just glad neither myself nor my instruments have ever been in the path of one.

Want to see MOAR turbidity current? Check out the whole video with the ROV in Mendocino Canyon.

And for no particular reason, here are 4 minutes of turbidity currents with a dubstep soundtrack.

One Reply to “ROV gets caught in turbidity current, lives to tell the tale.”