FACT: We study evolution in nematodes by constructing trees out of their penis size. 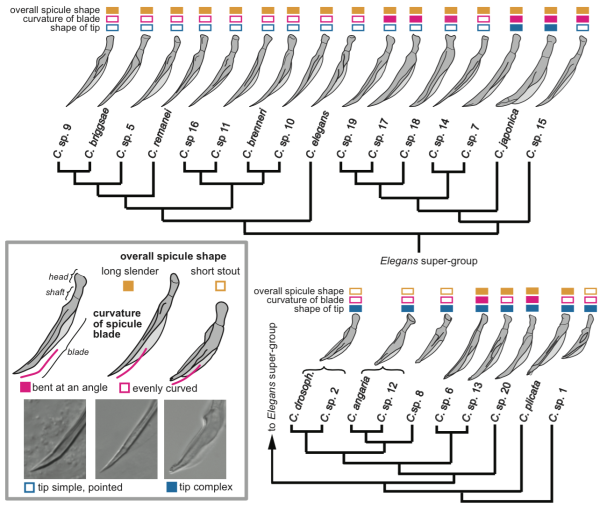 Ok, well a “penis” in male nematodes is actually a hard copulatory spine called a genital spicule–males physically pry open the female’s vulva–but you get the idea. What better way to open a blog post about the story of size?

Marine nematodes are the most badass of all nematodes, because they hold the records for both the largest AND smallest species out of the entire Phylum.

The world’s smallest nematodes or round worms have no common names and live in marine sediments. They are only 80 µm long, which means that it would take 20-30 of these minuscule worms lying end to end to equal the thickness of a single average coin.

Well Guinness, my marine nematodes don’t need your “common names” because they are too awesome for that. Hrumph. On the other side of the size spectrum, the award for largest nematode goes to Placentonema gigantissima, a parasitic species in the reproductive organs of whales that grows up to approximately 30 feet (8 meters) . Although based on my investigations, measurements of this giant nematode might fit under Dr M’s definition of “dubious record”, since the only scientific reference I could find was an inaccessible 1951 journal article from the USSR Academy of Sciences. On top of that I found one grainy picture:

In addition to overall size, some nematodes just have weird body proportions. The deep-sea genus Manganonema lives in sediments and is easy to spot under the microscope because of its really, really tiny head (the pointy end is the tail): 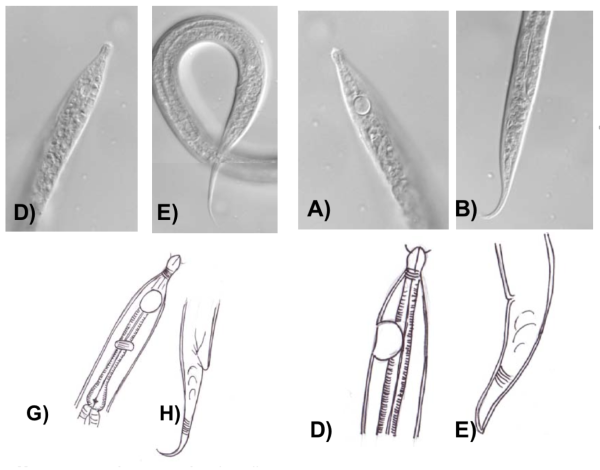 The bodies of some marine nematodes look like short little sausages (although rather hairy and spiky, which might ruin your appetite for sausages). Don’t let the electron microscope images fool you – both Desmoscolex sp. and Greeffiella sp. measure in around 80 micrometers (0.08mm or 3 thousands of an inch – on par with the Guinness World Record for smallest nematode):

Then there’s the really odd genus Draconema, which gives me nightmares because it looks like a hairy bloodsucking sperm. This worm uses the hairs all on its body for locomotion.

Draconema (image from Encyclopedia of Life)

And then there are the Epsilonematidae nematodes who can’t even:

But my favorite nematodes of all are the big predatory ones. I think this picture from the Nikon Small World competition eloquently sums up the story of size in nematodes–in their world, between grains of sand, some nematodes are lumbering giants and others are diminutive prey. But to us humans, nematodes are all tiny microscopic creatures, and too often ignored when we measure the ocean.