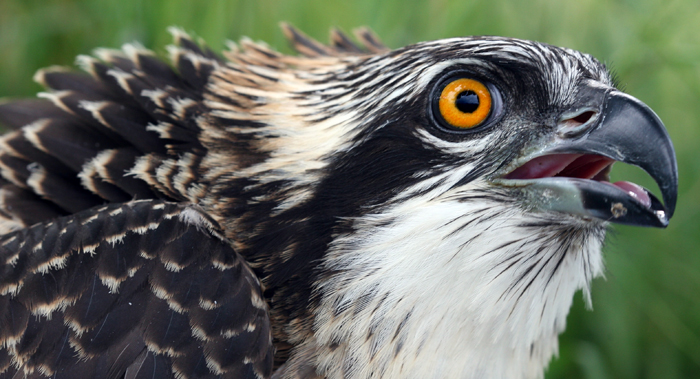 A true mariner of the raptor realm: the Osprey. Photo by Emyr Evans.

The Bird is the Word, but it’s the Wrong Word for the Right Bird

It’s Superb Owl Sunday, and America is once again pitting two sets of millionaires against each other in a sanitized, televised, and heavily corporatized modern version of gladiatorial combat of eons passed. With the beloved home teams squaring off in this nationally-revered sportsball event coming from opposite coastlines, the contenders from the rainy Pacific Northwest sport an iconic raptor as their mascot and spirit animal. This “sea hawk” is not a hawk, nor does it live entirely near the sea, and many comments about this bird I’ve heard 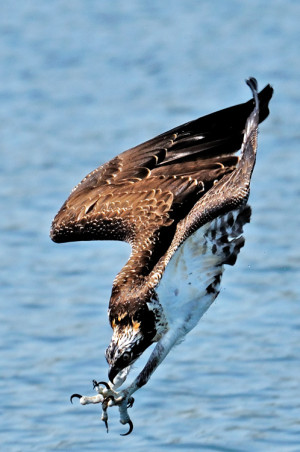 An Osprey about to score. Go team! Image by Graham Owen Photography.

on tv and radio over the past week (“a dumb eagle”, “a kind of falcon”, “a scavenger”) suggest that the majority of our nation’s brethren didn’t watch as much Wild Kingdom or pored over the Time-Life set of animal encyclopedias like I did in my younger days (and those were the days when the Los Angeles Rams were still the Los Angeles Rams, dammit). So just what is a “sea hawk” and why should you care about this majestic beast? Well friends, Deep Sea News is here to provide answers where others only offer pointless commentary.

The bird in question is actually an Osprey, neither a hawk nor an eagle, but a distinct and unique avian lineage (the Pandionidae), with this bird being the sole living representative of a long, skinny 30 million year-old branch on the raptor family tree.  “Sea Hawk” is a coarse, back-woods moniker long abandoned by ornithologists and birders, but in 1975 some marketing genius suggested the name for the city’s new team, and it stuck. As the vast bulk of its diet consists of fish it catches on the wing, it is always found in association with water, either the shoreline of an ocean, the wetlands of a bay, or even between man-made reservoirs deep within a continent. They also have one of the widest distributions of any bird on earth, and can be found spread somewhat unevenly throughout all the continents except Antarctica. I’ve seen these birds nab a catfish out of the Irrawaddy River, pull a carp out of a pond in California’s Central Valley, steal a pompano from a fisherman on St. Kitts, and catch a flying fish IN THE FREAKIN’ AIR in the Sea of Cortez. In Seattle, I’ve seen them toting everything from Salmon to Flounder, dogfish shark to herring, above the surf. 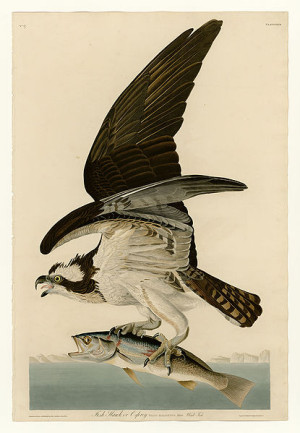 Heading toward the end-zone. Painting by John. J. Audubon, circa 1838.

Being a fish-specialist, evolution provides them the right tools for the job. These include especially long & sharp talons and strong foot muscles to grab a struggling fish, and special cleat-like scales on their feet to provide extra grip on a slimy fish body. While they don’t dive under the water to get a fish, they employ a lucky strike with well-aimed feet on a clueless fish at the surface, and a membrane on their nostril keeps out salt water from the inevitable splash. Once they nail their catch, one foot grasps the head, while the other foot clings to the base of the tail, and they aim the fish forward to make it as aerodynamically efficient as possible as it flies to a nest or roost to shred the fish into bite-size morsels with its sharp hooked beak.

Over the last century, Ospreys have seen their ups and downs at the hand of humans. Fishermen often shot them as competitors, and any game manager, fish farmer, or salmon-ladder operator treated them as the enemy to be killed on-sight. Between the 1950s and the 1980s, Osprey populations declined steeply from accumulated toxins like DDT, PCBs, selenium, mercury and a host of other chemicals, pesticides, heavy-metals and petroleum derivatives that made their way into oceans, rivers, and lakes. Smaller fish could handle low doses of these chemicals, but as these toxins become more intense at every step up the food chain, a process called bioaccumulation, Ospreys got the final high-dose. This can cause an inability to form shells around their eggs, or if they did, the chicks were often mutated, and adult birds suffered from diseases helped by a reduced immunity brought on by these toxins. 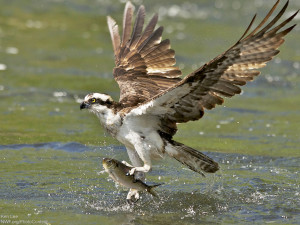 Pollution regulation, coastal protection, and laws prohibiting killing of Ospreys are proving successful in many areas, as in Seattle, and the Ospreys are making a comeback. Rebounding Osprey populations indicate healthy waters. Perhaps it is because of this return from the brink that Seattleites love their scrappy mascot, or maybe it is because this water-living bird reflects their own love for their beautiful and immensely complex coastline. Still, it could because those people living in the Puget Sound have an uncanny and innate ability to catch fish with their bare hands. Whatever reason it may be, I’m rooting for the Seattle Ospreys.