El Niño has been playing with my heart for a whole year now*. It’s coming. It’s not coming. It’s gonna be huge. It’s not coming now. The ocean looks like en EL Niño but the atmosphere doesn’t. Y U SO FICKLE THE CHILD? I cut my loses, ran from this atmospheric/ocean phenomena prediction and healed my bruised science heart. Until this morning… 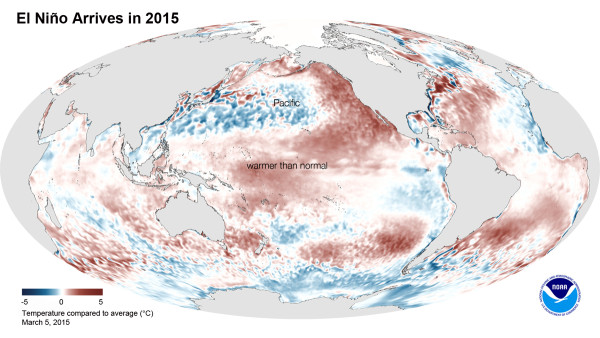 As this lovely map of anomalous sea surface temperatures show, the Pacific is running a little warm. And it’s not just yesterday that it’s been balmy, it’s been this way for the past 4 weeks. Predictions are looking pretty good too, and this forecast might stick. CAUSE IF IT DOESN’T MY HEART AND THE EASTERN PACIFIC WILL BECOME A COLD, COLD PLACE EL NIÑO.

My tortured emotions aside, it looks like the recent warming is the result of another, albeit successful, equatorial Kelvin wave that caused downwelling across the equator and letting that warming the waters off South America. And you I would be remiss if I didn’t include that the atmosphere decided to cooperate too. Thanks for being a team player wind anomalies!

Finally, an equatorial Kelvin wave than gets the job of El Niño-triggering done. Watch as it goes from West to East, depressing the thermocline and causing water to warm.

But there’s a bit of bad news for California. This wimpy El Niño probably won’t trigger more rain and some relief from the drought they’ve been having. Although I dare say the climate predictions, which do factor in contributions from ENSO along with lots of other variables, are looking pretty for the northwest and hell, even the east coast!  Anyway, we’ll see how this all develops and let’s hope that El Niño won’t break my heart again.

* I’m totally griping about the recent spate of predictions, but I know predicting the fate of El Niño is really a very difficult job. It’s a complex set of interactions between the ocean and atmosphere that we are still learning about. In short, hat’s off to all the scientists trying to figure it out and inform the world about it.

Share the post "Are the ocean and atmosphere finally cooperating and is El Niño really here? Probably."

One Reply to “Are the ocean and atmosphere finally cooperating and is El Niño really here? Probably.”