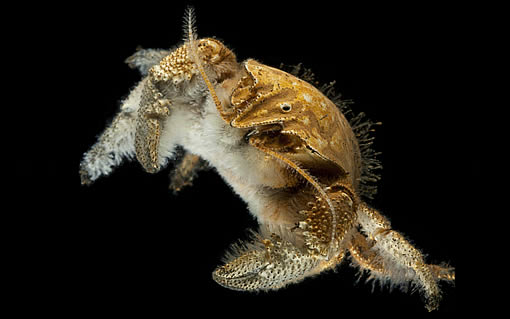 Within just a few short centimeters the temperature drops from 350˚C to -1.5˚C (692 to 29.3˚F). At 2.6 kilometers deep in the Antarctic Ocean lies the East Scotia Ridge (ESR) dotted with hydrothermal vents. Here, in this unique spot the world’s coldest ocean is in contact with one of the seafloor’s hottest environments. Life residing at hostile vents must live in an environment so thermally variable it rivals the temperature differences seen among the most hostile planets in our own solar system. Yet life flourishes here with amazing adaptations. 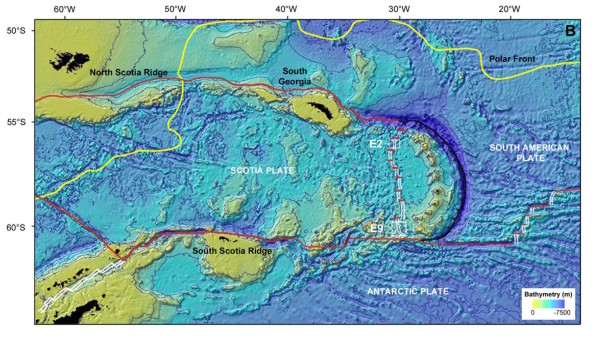 In the video a large Hoff crab covered in filamentous bacteria (00:01–00:18) Two large male try to lay the hurt on one another (00:18–00:41) Group B at the Carwash chimney (00:42-01:11).
One of these animals is the yeti crab, a peculiar crab with hairy pelt constructed of filamentous symbiotic bacteria. These bacteria grow off the vent fluids and sustain the crabs. At the ESR, the Hasselhoff yeti crab, Kiwa tyleri reaches abundances far greater than yeti crabs at other vents. In some areas, K. tyleri can reach over 4,000 individuals in area less than the size of a medium-sized coffee table. Yet at the same vent, Hoff Crabs occur at less than 50 in the same sized area. New work by Leigh Marsh and colleagues reveals how this variation in crowd size reflects the complex behaviors of male and female yeti crabs and their differing priorities. The authors of the new study amassed a tremendous collection of data including distributions of individuals around the vent, body size, sex, and even ovary and embryo development.
In the video above a male Hoff Yeti Crab reacts to hot vent fluids

At the hottest spot, near the venting fluid, is the ‘A’ assemblage comprised of only very few of the largest males getting close to the vent fluid to fuel their bacteria and eventually their own growth. Larger males may be more successful in crab fight club beating out other males in getting out of the friend zone with females. 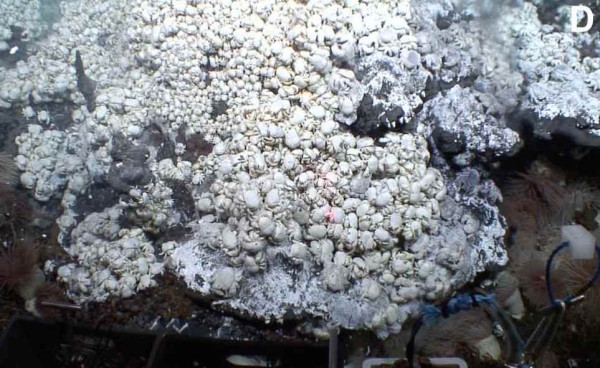 Further out from the venting fluid is the ‘B’ group, a mixture of medium size males and females. This coed party can be in the 100’s per meter squared. The majority of the females here possess ripe ovaries suggesting they are receptive to the sexual inquiries of the males. Further out again from the venting fluids is an additional coed party, ‘C’ group, and despite only being attended by the smallest of females and males densities reaches over 4,000 per meter squared. This area smells a lot like stale beer and hormones, is illuminated by glow sticks, and all overlaid with rhythmic pounding of the latest pop hit club remix. There ain’t party like a C group party because a C group party never stops.

At the very periphery, far from the venting fluids and at the coldest temperatures, is a transition zone. Here, juveniles are in search of the venting fluids to sustain their harry bacteria. In addition, brooding females find refuge here for their young from the environmental extremes of the vent and potential damage from lusty crabs crawling all over each other.

In short, males are driven by sex and food as you might expect from a crab with luxuriant chest ‘hair’. The females add the additional priority of actually carrying and caring about the young.