With the first taste of palolo I understood the Samoans’ love for it. Certainly it suggested a salty caviar, but with something added, a strong, rich whiff of the mystery and fecundity of the ocean depths. 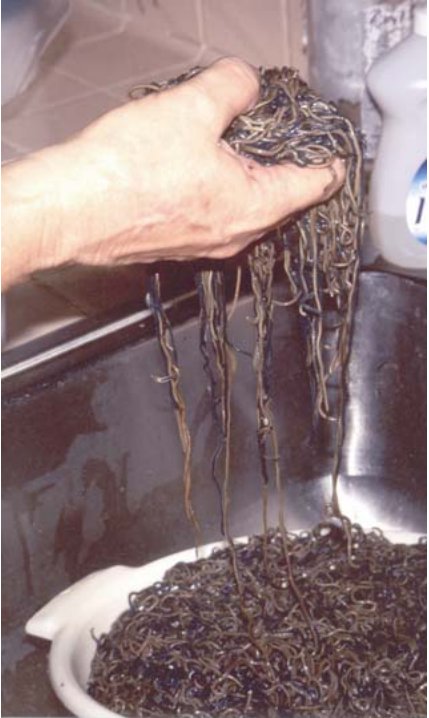 This is not a picture of squid ink pasta. This is a picture showing writhing, detached body parts of polychaete worms (“palolo”, a.k.a. genus Palola), considered a delicious delicacy on a number of Pacific islands such as Vanuatu and Samoa. I’m told that “worms are enthusiastically gathered with a net, and are either eaten raw or cooked in several different manners”, and that “hardcore palolo connoisseurs grab the wriggling green-and-blue worms and swallow them raw on the spot”. Palola worms carry out mass nighttime spawning during summer months in the Southern Hemisphere, prompting a collection craze across Pacific islands from October – November.

I didn’t know this was a thing. I’m all about the invertebrates, but I think I’m going to stick to eating shellfish and shrimp. Two reasons: First, I’m not the kind of person that can stomach this type of cuisine. The spaghetti-like mass that islanders collect is not the actual Palola worm itself, but a dense package of sperm and eggs that detaches from the main body before spawning (the “epitoke”). “..as thick as vermicelli soup..the water is milky with mucous” is not a description that whets my appetite. On the contrary, it makes me wonder whether someone has thought of making a Palola-themed adult movie.

The second reason I’m staying away? These worms are listed on the IUCN Redlist of Threatened species–local extinction of Palola species has been observed in some places as a result of overharvesting. These worms have immense cultural significance for native Pacific Islanders, and I’d hate to be a food tourist contributing to an unsustainable fishery (since eating palolo inherently reduces the potential reproductive success of these polychaete species).

But mainly, after watching this video of epitokes, I just can’t even. And also, because it apparently tastes “a little scratchy.”

Schulze, A. (2006) Phylogeny and Genetic Diversity of Palolo Worms (Palola, Eunicidae) from the Tropical North Pacific and the Caribbean. Biological Bulletin, 210(1): 25-37