This past year Eric Betzig, Stefan Hell, and William Moerner received the Nobel Prize in Chemistry “for the development of super-resolved fluorescence microscopy.” From simply putting two pieces of glass together for magnification purposes to being able to follow individual molecules within a cell, I think saying we have come far in the field of microscopy might be a bit of an understatement. A couple of months ago however, I happened upon a recent contraption that I would argue holds it’s own in the land of awesome microscopic innovation.

I had been sent a link to this thing from Stanford called a Foldscope. I had no idea what it was (probably industry spam), but beyond my better judgment of sending it straight to the e-dumpster, I clicked. Long story short, Stanford’s Prakash Lab had come up with this relatively crazy, but sort of genius, idea of making viable microscopes completely out of paper. I had no idea how in the hell this was possible, but they were looking for beta testers….so naturally I wanted 50 of them.

Fast forward to the day I had given up all hope of obtaining my funky little contraptions…they appear on my doorstep in a flat rate envelope that couldn’t possibly hold 50 microscopes. What came next was about 20 minutes of tinkering and rekindling my pro 2nd grade origami skills, about 5 hours of looking at anything and everything small enough to fit on a microscope slide, and alas the opening of a whole new world of possibility. 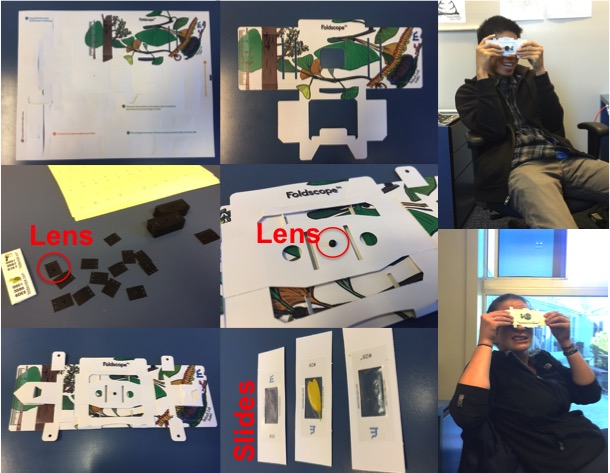 All the various stages (pun intended) of Foldscope production. And my lovely office mate Brian and I modeling them….it’s a good thing we are in science and not modeling.

Needless to say…Foldscopes are my new favorite toy….and this is why.

First of all, it took me literally 20 minutes to put together (could have been less if I hadn’t been geeking out the whole time). Mind you this is a fully functioning bright field microscope made out of a single sheet of paper, weighs less than a nickel, fits in your pocket, can be dropped from a three-story building, stepped on, and has 2,000x magnification capabilities. Harnessing all the power and sexiness of mathematics, physics, and biology…for a mere 50 cents per scope. Not only is it financially accessible for millions around the globe, it’s simple and that is a beautiful thing. But does it work?

Now the Foldscope was originally derived to one day work as medical diagnostic tool around the globe, which is fabulous. However, aligning with my beta testing duties, my first thought was…how can I beat the scope? What test can I give that it can’t pass? So of course, as a marine ecologist, I took it to the toughest environment there is…because we all know that salt water is the ultimate test. Being that seaweed is my first love (and it fits on a slide) I started there. 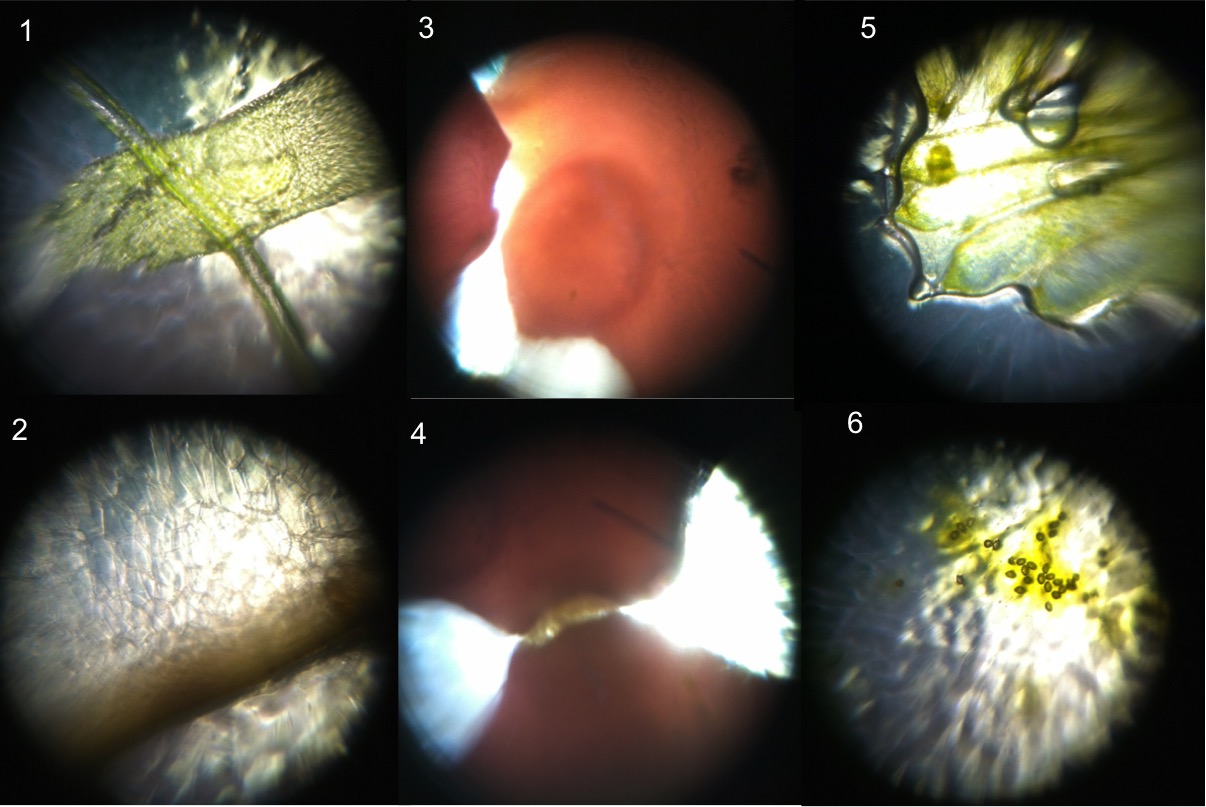 1. Ulva (the two green lines with the white lines between (distromatic)…that is the middle of the seaweed) 2. Giant Kelp cells (Macrocystis pyrifera) 3. Reproductive conceptacles of coralline algae 4. the fibers that keep the coralline bits together in same algae 5. the utricles of Codium fragile 6. flower pollen

As you can see from the pictures, the results were MIND BLOWING. For those in the house who aren’t phycologists, you are seeing everything from kelp cells, to reproductive seaweed bits, many of which are used to differentiate between species! Not only that, but the Foldscope has different morphs. You can attach it to your camera phone using little magnetic strips AND you can use the flashlight on your phone to make it a projecting microscope. People…..A PROJECTING MICROSCOPE!!!!! Needless to say, I work with five other biologist in my office….every single one was floored at the power and resolution of this small little package of awesome.

Utilizing the projection capabilities to put Ulva and bugs on my desk.

Coming off the ultimate nerd high, perhaps the coolest part of the Foldscope is the possibility of what we can achieve with such a simple piece of technology. The implications for countries around the world fighting raging wars against disease are substantial. Diagnosing many of these diseases is half the battle and Foldscope has the real potential to do this. However, this also presents a tangible way for all students, regardless of social or economic status, to have a microscope in their pocket. To take a look at the miniature world for themselves and stand in awe of it. To inspire the next generation of thinkers, wonderers, scientists, and people to take a closer look. The endless possibility….is why Foldscopes are my new favorite toy.

To learn more about the specs on this brilliant invention, check out the paper:

Note: For now Foldscopes are not yet commercially available, but I hope this article puts another tick on the board of why they should be. Kuddos to the Prakash Lab for putting a new spin on science.