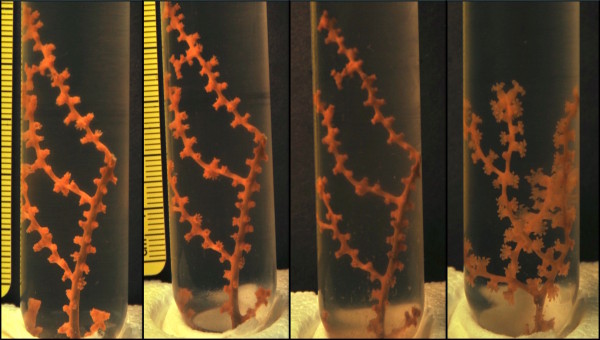 Paramuricea corals in the oil plus dispersant treatment. The vials (from left to right) contain corals at the 24, 48, and 72 hour time points, with the control sample on the far right.

Just near 6 million liters of oil spilled out of Macondo well in 2010, about 6 supertankers worth of oil. The ramifications of the oil spill are still being documented and far reaching but included aberrant protein expression in fish gills, altered bacterial communities, and a whole suite nastiness in dolphins. At three different sites deep-sea corals appear to be impacted (study 1, study 2). Corals were covered with brown flocculent material and showed telltale signs of stress including excess mucus, enlargement of the skeletal elements (sclerites), and tissue loss. But new work suggests that it was not the oil that leads to unhealthy and dying corals rather dispersant. 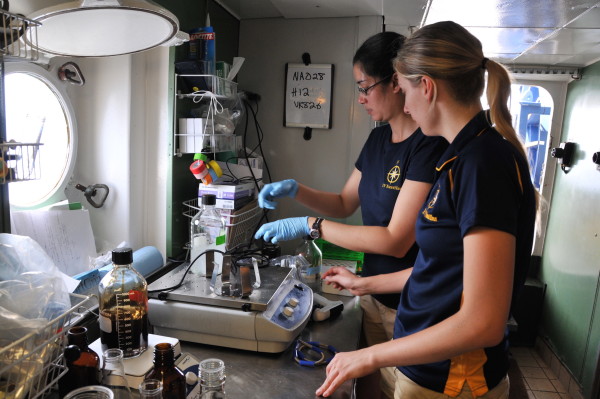 Danielle DeLeo and Dannise Ruiz (two of the authors) making stock solutions of oil and dispersant on board the EV Nautilus during the 2013 field season.

Nearly 7 million liters of oil dispersants were applied during the cleanup efforts, 3 million of these in the deep sea directly near the wellhead. Yet little is known how oil and the dispersant, and the mixture of the two, impacts deep-sea corals. New work by Danielle DeLeo and colleagues sets out to address this in three different coral species. The group collected individual corals from the deep Gulf of Mexico using remote operated vehicles. On board corals were exposed to crude oil (collected from Macondo during the spill, dispersant (Corexit 9500A), a mixture of the two, and a seawater control. 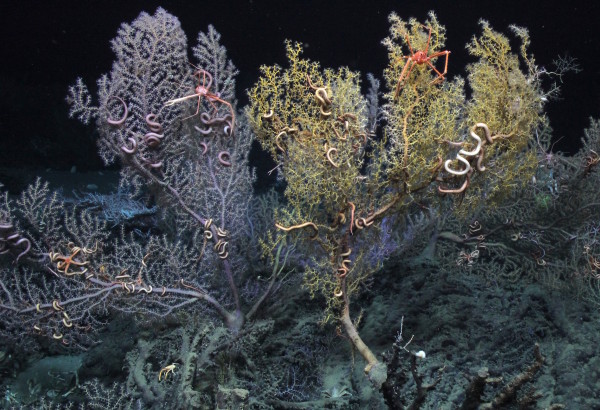 Paramuricea sp. from 1000 m depth at a site in the Atwater Valley region of the Gulf of Mexico.

All three deep-sea coral species examined showed more severe declines in health in response to dispersant alone and the oil-dispersant mixtures than the oil-only treatments. To restate, the dispersant was more toxic than the oil. Dispersants are known to disrupt the normal function of cell and organelle membranes. This means molecules are not transported normally across the membranes and cells cannot osmoregulate. Dispersant mixed with oil increases polycyclic aromatic hydrocarbons that organisms break down into toxic forms. Basically, the dispersant, as designed, increased the proportion of crude oil compounds that were biologically available.