This oddly plumaged penguin appeared in my Antarctic & Arctic Data Consortium 2015 calendar (yes, I have a data calendar) and I needed to know…why on earth does this penguin have a fauxhawk?

And of course there is no better day to answer this question than on World Penguin Day! Before this, I used to think there were two states of penguin life.

STAGE 1: THE FUZZY BALL OF SQUEE

AND STAGE 2: THE HYDRODYNAMIC SARDINE HUNTER

But what I did not realize, is there is a state of penguin existence that occurs between the two. The state between fluffy baby feathers and sleek, waterproof, adult feathers. This state is called molting, and can only be described as downright awkward. During penguin molting, every single baby feather on their body is replaced with a new adult one. This process is often called a “catastrophic molt” because all the feathers are replaced at once. And that scruffy look, it’s because the old feather won’t fall out until the new one has completely grown in. But what really got me, besides the awkwardness, is the unique patterns of feather loss. Molting, it’s a catastrophe on so many levels.

SOME ROCK THE TRAVOLTA…

…OR IF YOU PREFER, THE REVERSE TRAVOLTA.

SOME DAYS YOU JUST CAN’T GO ON MOLTING.

THEN THERE ARE THE MOLTS OF WRATH.

AND OTHERS JUST EMBRACE THE MOLT. #TTT [THUNDERDOME THROWBACK THURSDAYS]. 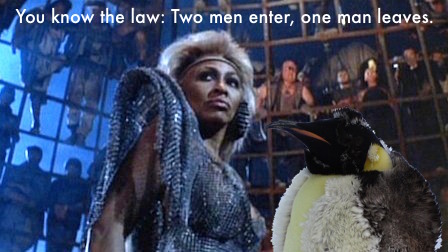 Luckily for us humans, we only have to endure teenage awkwardness but once in our lives (but the memories are forever). Penguins on the other hand are DOOMED to repeat this atrocity each and every year. The process usually takes about 2 weeks and during this time the penguins are fasting, forced to stay on land and unable to feed because during the molt they are no longer waterproof. But don’t worry too much, penguins gorge themselves beforehand and they have plenty of fat to live off of during molting (no penguin sweaters needed). So in honor of this intense physical and mental penguin process, I unofficially dedicate this World Penguin day to the molters, because everyone deserves to grow out of their awkward phase.