No matter where you go in the ocean, there will always be noise. Rain, waves, wind, ice, whales, boats, kraken screams, etc. All these processes have specific noises associated with them, creating an ever present background rumbling in the ocean. But it’s the constant snap, crackle and pop of melting glaciers that turns fjords from the sound equivalent of your local library into happy hour at the bar on Friday night. 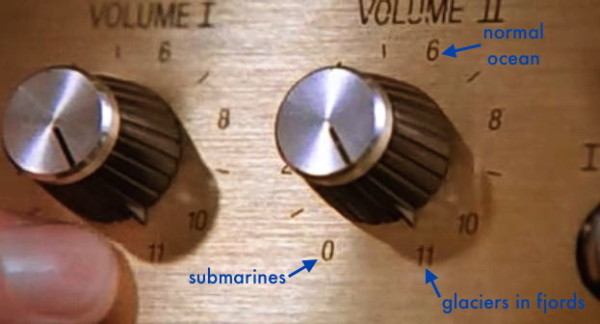 Glaciers, turning ambient noise up to 11.

It’s not news that glaciers are melting, nor is it news that sea ice makes noise. But what is new is that their melting causes some of the loudest ambient noise in the ocean.  As glaciers melt, they release little air bubbles that have been trapped in their icy matrix for Millenia. It’s the separation of these little air bubbles that is creating all that damn ocean racket. As the bubble pinches itself off from the ice, it makes a tiny little pop. The sound of one little bubble being pinched is kind of adorable actually.

Larger bubbles sound like the happy knock on your door when your neighbor realizes you are having an impromptu dance party to their favorite song and can’t wait to join in.

Magnify this by the surface area of a glacier slowly sliding into the sea and melting. Millions upon millions of bubbles being continuously released. The sound….well it’s almost deafening. Puts the satisfying snaps of Jiffy Pop to shame.

One of my favorite parts of this experiment is how the sound of a 1000 pinched bubbles was associated with all this noise. The researchers hiked to Gulkana Glacier in Alaska, cut off a chunk of glacier ice, brought it back to the lab, and listened to it while it was melting. Then, they compared the sound signature of the escaping lab bubble to the ambient noise in the fjord and found they matched! I’ll never look at my ice cube melting in my Gin and Tonic the same way again.

In the wild, it’s not that easy to listen to glacier ice. Glaciers that terminate in sea water are notoriously hard to approach. Especially when large chunks of ice are constantly falling off them, potentially falling on your instruments, your boat, or even yourself. To listen to a glacier you have to deploy a special underwater listening decide called the hydrophone, which is just a microphone that works really well in water. FYI dropping your phone into the sea does not make it a hydrophone, it makes it a brick.

The hydrophone was deployed close enough to listen but far enough away so that it wouldn’t be maimed by glacier ice. After a year of listening and comparing data from three different glaciers, they found that ambient noise levels were higher in warmer fjords. More melting = more bubbles = more noise. Although in this study noisiness wasn’t well matched with ocean tides, winds, or even air temperatures. The relationship between the atmosphere and glacier melting? It’s complicated. But in any case, listening to glaciers is a viable and relatively easy way to figure out when glaciers melt a little or a lot.

But I should be clear here, while ambient noise in fjords in increasing because of glacial melting, this is by NO MEANS the loudest sounds in the ocean. If you want to hear obnoxiously loud noises, go to places where glaciers are calving. Ice quakes are responsible for the bloop, which I am still convinced was initially caused by the kraken needing some ice for a cocktail. For intolerable and deafening levels of noise, go find yourself a seismic airgun survey or a navy sonar. Unless you are a cetacean, then that is a terrible idea.