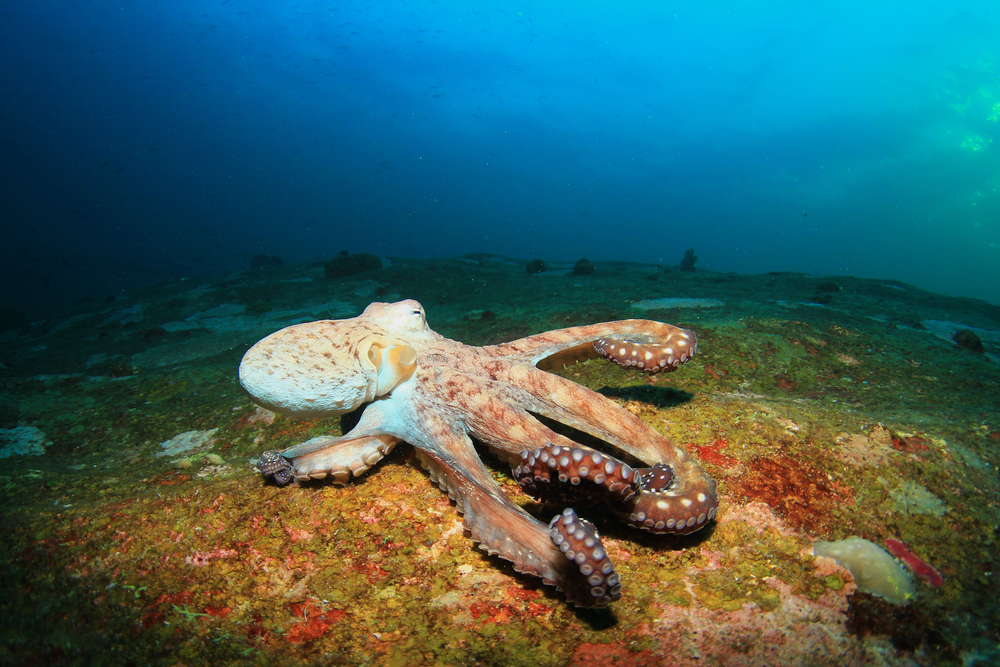 Let’s face it, octopuses are just going to be our cephalopod overlords. They have 8 arms, 3 hearts, Moms eat their own babies so the others can survive and they put Houdini to shame with their escape artistry. And now let’s just add to the list that they are way better at crawling than we will ever be.

If we landlubbers want to make a turn, we nearly always need to turn our 2 clumsy feet in the direction we want to go by rotating our entire body (unless we are determined to an an awkward crab side-scuttle). Not so for the octopus. Using the beautiful radial symmetry of their 8 armed body, they can crawl along just as gracefully in any direction without having to turn their bodies. In other words, the direction their arms propel them in is completely independent of the orientation of their head and body. Check out the crawling action below, the blue arrow is the direction of motion while the green arrow is the orientation of the octopus body. KEEP YOUR EYES ON THE GROUND OCTOPUS.

Octopus crawling is actually pretty simple, they just shorten and lengthen their arms to move forward, getting grip with those awesome suckers. This is similar to the how some mollusks move, octopi just have way more arms to coordinate. And unlike most animals, their gait isn’t a well-coordinated affair with a distinct rhythm like human walking or horse trotting, it’s just kind of random. Although they do preferentially use their back 4 tentacles to move and have favorite tentacle pairs they use together. Grade school must be a nightmare when trying to figure out what tentacle to put that pencil in. #3 right-tentacled? Ambi-tentacled?

Even though we know that octopus locomotion is amazeballs, we still don’t completely understand how they coordinate all 8 of those arms  (Immediately upon posting this I got a schooling via text from fellow deepling Alex Warneke: Octopi uses chemical signals so they don’t get tied up in knots. Their suckers recognize the “scent” of their own skin and will not stick to it :)”). And while they can crawl independent of their body position, octopi often don’t. Instead they face at a 45 degree angle to their motion. Why? So their eye faces forward! Because an octopus walking into a wall would look pretty stupid.