Many descriptors have accompanied the emails, texts, and Facebook messages that have recently flooded my cellular device, all describing one unique ocean beastie… 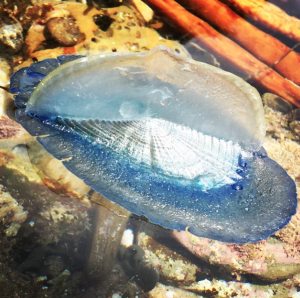 With Spring alterations in wind patterns, hoards of blue, planktonic sailors known as Velella velella have raided the Western seaboard of the United States by the billions. Though commonly confused as jellyfish, Velella are actually upside floating ships of hydroids. Think a colony living under one Pringle-shaped roof, rather than an individual.

Though Velella do sting, you will not necessarily feel their harpoons of death, aka nematocysts, pierce your skin. (However, No promises if you were to try to lick one….) Last year, our very own RR Helm even posted an amazing video compiled by the masterminds of MBARI perfectly describing the secret lives of these colonial creatures. 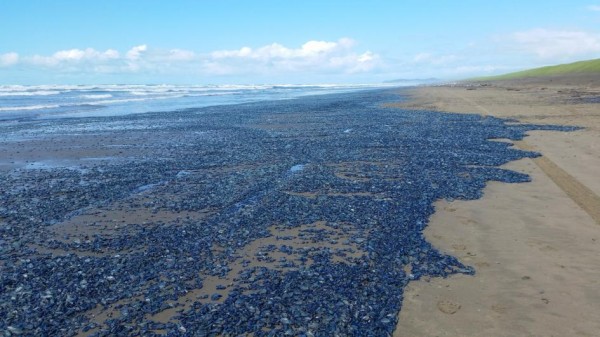 The one question that remains unanswered…what in the heck are we going to do with all of them now that they are here?! Summer is coming and we can’t very well have the beach looking like this when all the tourists come!

The only viable answer I could come up with… 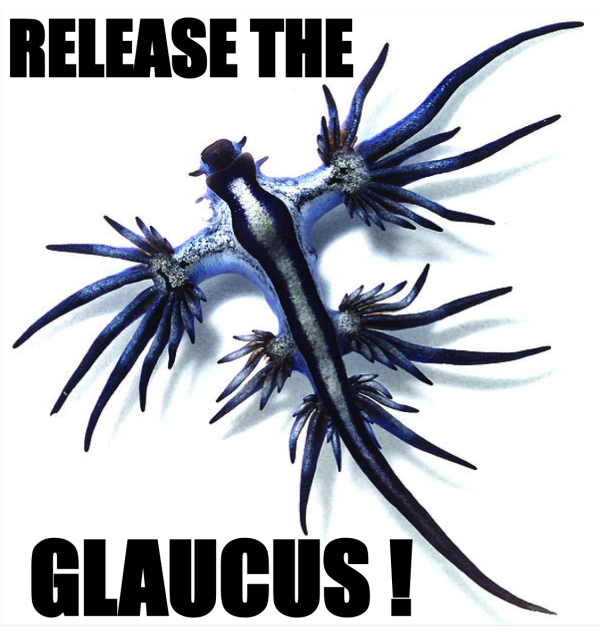 I know what you’re thinking. An army of bright, blue, squishy, ocean pokemon might not seem like a viable option. And to that I label you a dream crusher. In fact, these aeolid nudibranchs, known as Glaucus atlanticus, LUURRRVVVEEEE to nom all the Velella they can eat! They even steal the Velella‘s super stinging powers and make them their own. And what’s better than getting ANOTHER even crazier alien-like ocean creature to do your bidding?

Needless to say, this half-hatched “Velella Clean-up Plan (v 1.0)”  is still in the Development Stage as Glaucus don’t typically make their way here to the West Coast. They are often found in more tropical regions destroying those Velella. We could plausibly use the pelagic snail Janthina as our master villain too…but the tagline “Release the Janthina!” just doesn’t have the same ring to it. For now we are just brainstorming….but for precautionary measures DSN has begun recruitment of our very own Glaucus army. Be afraid.