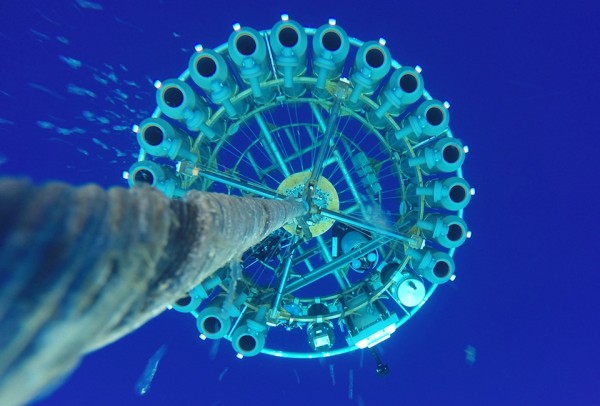 If I ever meet Wendy Schmidt in person, it’s probably going to be awkward. I’ll be doing my best to not instantaneously bear hug this woman who has sponsored a series of XPRIZE competitions to save the oceans from ourselves and push innovation in ocean technology forward. First it was an oil cleanup machine. Now it’s ocean health. In this latest ocean challenge, 12 teams were tasked with creating better, faster and cheaper pH sensors to understand ocean acidification. And the winner, Sunburst Sensors was able to achieve all these things.

Ocean acidification, once called global warming’s “equally evil twin“, is a big problem that we still have a lot to learn about. The world’s oceans are becoming more acidic, caused by increased anthropogenic CO2 that the ocean readily absorbs. When the pH drops, it’s not good for all sorts of sea beasties. Beasties shells made from calcium carbonate (pteropods, crustaceans, plankton, mollusks… the list goes on) start to dissolve. Their beastie babies have a hard time growing shells. Corals can’t make hard skeletons. Other beastie’s immune system weakens. And in some beasties their metabolisms sloooooww doooowwwn. Bad news bears all around.

The thing is, even though we know that ocean acidification is bad, we are still have a lot to learn about where it’s happening and how it affects ecosystems. The reason? It’s really f’ing hard to measure pH. The most accurate way to do it is to take a water sample and analyze it in a lab. But that’s hard, expensive, time consuming and you can’t process that many samples. The easier way is to use a pH sensor, but the before today, the technology just wasn’t that accurate. A cash prize contest is the perfect way to give that technology a much needed kick in the ass.

To start, Xprize contacted 25 scientists to find out what they needed/wanted/yearned for in a pH sensor. Turns out it was two things: a really accurate sensor and a really cheap one. The contest winner, Sunburst Sensors did both of these things.

Currently, most commercially available pH sensors are electrode based, estimating pH by measuring the change in the electrical potential of seawater when certain ions are present. The Sunburst team uses an entirely different method. Every hour, their SAMI pH sensor takes a small water sample and mixes it with a special dye whose color is sensitive to pH. Then, to measure the change in color they shot laser beams through the dyed water and VOILA, pH is calculated! And the results were amazingly accurate. In one test they rivaled the numbers gotten from simultaneous lab samples. But seriously, does this mean Sunburst will start using sharks with frickin’ laser beams on their heads to monitor ocean pH? Totally sounds plausible to me. 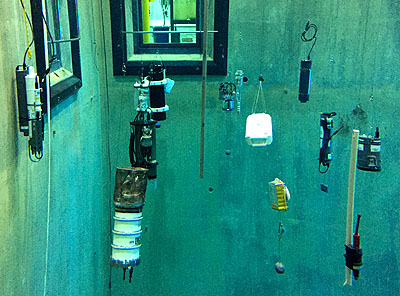 Lest you think that I only find sea life creepy, this tank of dangling pH-sensors at MBARI are pretty eerie too.

All the pH sensors were subjected to a battery of tests. First they were tested for accuracy. Then they sat in a seawater test tank at MBARI for 2.5 months. Then exposed to natural ocean conditions (tides, winds, runoff, biofouling) in a custom tank at the Seattle Aquarium. Finally, they were plunged to 3 km depths off the coast of Hawaii. The Wendy Schmidt ocean sensor gauntlet is fierce people.

What is really amazing is the price of the i-SAMI, Sunburst’s low cost sensor. Less than $1000 to manufacture. This is pretty incredible when most sensors typically cost upwards of $10K. More pH sensors for professionals and citizen scientists alike? YES PLEASE.

But this competition is not only about pH sensors, it’s about new ocean technology. In addition to gaining better pH sensors, 10 additional patentable innovations were created by the contest. Innovations like better wireless data transmission. And during the 2.5 month long MBARI tank tests all the teams learned how to better combat seawater corrosion, which can wreak havoc on an ocean sensor.

Finally a big hearty congrats to Sunburst Sensors and all of the other XPRIZE entries! Thanks for creating some really great technology and for helping to make our oceans a healthier place.

AUTHOR’S NOTE: During the testing in Seattle, I had a lovely brunch that included mimosas and donut holes with my friends Chris Kellogg (Judge, Ocean Health XRIZE) and Jyotika Virmani (Director of Technical Operations, Ocean Health XPRIZE). I learned much about the spectacular testing tank.

A lovely interview with Wendy Schmidt, the winners and the XPRIZE team

NOAA PMEL and their involvement with sensor testing

One Reply to “Wendy Schmidt XPRIZE is an awesome win for ocean health, ocean science and ocean technology”