Is Flipper a junkie? Deep Sea News has always provided the fair and balanced approach to dolphins, recognizing their essential role in the oceans’ ecosystems, yet bringing to light their darker side. Of all the heinous acts dolphins commit, as judged within our own moralistic anthropomorphism, the links between dolphins and drugs are the most widespread and least know. 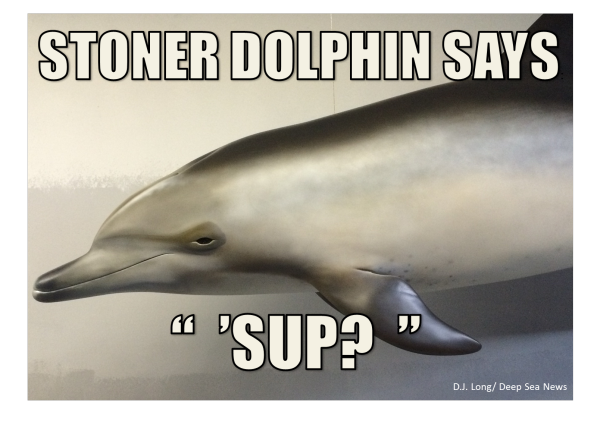 1) Dolphins as Recreational Drug Abusers?
Two years back, a sensational yet possibly important finding was released via the internet of observations that Bottlenose Dolphins caught and tortured small pufferfish into releasing Tetrodotoxins. This intensely powerful poison protects these fish from predators, and can kill anything that eats them, including sushi

connoisseurs seeking the thrill of fugu, the elusive and expensively-prepared raw pufferfish. Theoretically, low non-fatal doses of the toxins were providing a high for the dolphins that they actively sought to score mind-bending bliss. What became apparent is that this ‘discovery’ was merely an observation loaded with assumption within no framework of actual scientific research, and more importantly, it became a marketing ploy for an upcoming television program on dolphins. Despite this behavioral interpretation being untested and unproven, the hilarity of stoned dolphins caused the blogosphere to erupt with sweeping generalizations of recreational drug use among dolphins, and fears that gangs of pufferfish-toking dolphins might terrorize your favorite Club Med, added to our list of grievances against them.

2) Dolphins as Victims of Drug Abuse?
2014’s BBC exposé about neuroscientist John C. Lilly and his systematic dosing of LSD and Ketamine to captive Bottlenose Dolphins made lot of people lose their scat in a big way. How could – and why would – someone send dolphins on an acid trip? It’s not like they are Peter Fonda or anything. While the 1960’s were the heyday for oceanographic expeditions and marine science, it was also the golden age of harebrained

hippie pseudoscience, and it just made perfect sense to slip drugs to dolphins to better understand their ‘consciousness’. Lilly’s intent was to develop a method of communication between man and dolphin, whether dolphins wanted to or not didn’t really figure into his scheme. Of course, it never worked. Despite a flurry of recent articles about Lily’s work, none of it was ever really secret, and I even heard about Lilly’s dolphin drug den from a professor when I was a teenager taking a marine mammalogy course at my local community college way back in 1984. What shut down his project wasn’t outrage from the public or other scientists, but a combination of lack of funding (well after NASA pulled out), the lack of any tangible peer-reviewed research, Lilly’s own accelerating drug use, mortality of his captive strung-out dolphins, and the 1972 Marine Mammal Protection Act that prevented Lilly’s kind of direct abuse to dolphins. Nothing came out of Lilly’s dolphin dosing experiments, but years later, video game creator Ed Annunziata was so entranced by Lilly’s increasingly fanciful and paranoid writings, particularly about the possibility that humans and dolphins might be able to communicate with aliens, that he developed Sega’s Ecco the Dolphin.

3) Dolphins and Drug-Fueled Raves?
I’ve seen dolphin shows at marine life parks, and while they are pretty damned ace at diving through flaming hoops, they are still lousy dancers, so what are they doing at raves? Sadly, from a great-idea-gone-horribly-wrong debacle involving a rave in the Swiss amusement park Connyland, we now know that raves and dolphins definitely do not mix.

Even the greenest novice of dolphin fun-facts knows they have an incredibly sensitive and complex ability to receive and process sound, so what idiot green-lighted six hours of high-decibel disco thump thump thumping next to a dolphin tank? This is the type of deafening sonic warfare we used to torture dictators (I’m looking at you Manuel Noriega!), so nobody should have been too surprised when two of the dolphins went belly-up the next day. One was dead, the second would die a few days later. The real surprise wasn’t that they died from the ear-blasting dance music, but that a the toxicology report from the necropsy found them to have high concentrations of Buprenorphin, a synthetic heroin popular at raves, likely slipped to them by a raver, possibly to better understand their ‘consciousness’, which deteriorated into unconsciousness and death by drowning. As with any murder mystery, fingers were pointed at other culprits who were later cleared of wrongdoing.

The only thing even more unfathomable than dolphins tripping their lights out during a Swiss rave is this question: what the hell are dolphins even doing in Switzerland in the first place? My initial thought was so they could be closer to all the offshore banking (sorry), but in reality, wherever some city leader or chamber of commerce officer hatches a plan to build a municipal aquarium as a tourist draw or potential cash-cow, it means there will be dolphins, even in the Alps. Sadly, but not unexpectedly, many dolphins do not adjust well to captivity so far from the sea and away from members of their own pod, so socially-dysfunctional behaviors like aggression and anxiety can be treated with drugs like Valium, used to ameliorate the same mental disorders in humans.  As some have asserted, these drugs can be potentially be overused in captive animals, and may ultimately hasten the death of dolphins in captivity. 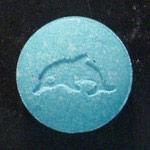 In an even more ironic twist, several of the most widespread and dangerous drugs at raves are Blue Dolphin, White Dolphin, and Pink Dolphin, basically cheap derivations of opiates, methylamphetamines, or methamphetamines, each pill embossed with a tiny dolphin. To take that irony to the third degree is the drug Dolophine, a type of methadone that is used as a pharmaceutical therapy to wean users off of opiate-based rave drugs. When a doctor is administering Dolophine as a treatment for an addiction to Blue Dolphin, they can use the treatment tracking system called DoLPhIn, the Database of all Pharmaceutical Inventions, to better manage their care.

4) Dolphins and Mexican Drug Cartels?
Earlier this year, May 24th, a 66 pound load of cocaine with an estimated street value exceeding $3.5 million US, washed ashore on a Galveston, Texas beach. Bootleggers dumping their load to evade capture or erase the evidence isn’t new, but this one was particularly interesting. Each of the 1 kilo packages were wrapped in black plastic and stamped with a white dolphin – the logo of the notoriously violent Gulf Cartel. Beach combing for drugs seems to be the new pastime for coastal law enforcement as these types of discoveries

happen virtually on a weekly basis. You would think that dolphins could make use of these parcels (they have a blow-hole after all), but it is morphologically impossible for dolphins to ingest cocaine in the usual manner, and toxicology sampling from live and dead-stranded dolphins from the Gulf of Mexico and Caribbean have yet to show any level of discarded cocaine in their system.  With ramped-up enforcement by U.S. and Mexican authorities, moving large quantities of drugs from Mexico is getting costlier and more difficult, so a loss like this batch of cocaine can be a big financial hit to the cartels. Since drugs are becoming less of a guaranteed money-maker, cartels are diversifying, putting money and effort into everything from extorting lime growers to illegal tuna fishing. Mexico and several other Latin American countries have been trying for decades to make their legal tuna fleet abide by ‘dolphin safe’ regulations or face a ban on their fish from US canneries, but cartel-backed tuna boats follow none of these regulations and kill hundreds of dolphins in tuna nets with impunity while easily moving their product with well-honed business skills of violence, bribery, corruption, and intimidation. Moreover, these same fishing boats are often used in the transport of cocaine and marijuana, with the tuna odor effectively thwarting drug-sniffing dogs.

5) Dolphins as Anti-Drug Enforcers or Junkie Athletes?
On the front line of the high-seas War on Drugs is The Dolphin, an 87-foot US Coast Guard cutter that has made record drug seizures in recent years in the drug-running hot-zone between south Florida and the Caribbean. The Dolphin’s crew intercepts drug cartel’s cocaine-packed speedboats blasting across the Caribbean from

Colombia and dilapidated tuna boats stocked with bales of marijuana from the Dominican Republic, and each year they confiscate tons – literally tons – of drugs, but much more still makes its way to the shores of Miami.  And here, one type of dolphin in particular has an intense hunger for drugs – the Miami Dolphin. With their long-running parade of current and former players failing drug tests, caught carrying or dealing drugs, and even keeling-over from drug-related deaths, this team far out competes any pufferfish-toking dolphin gang, any time, in any ocean.

One Reply to “Dolphins and Drugs – The Shocking Connections”