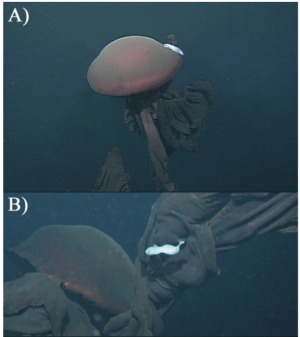 From Drazen and Robinson

New spectacular video of a enigmatic jellyfish is going viral across the internet (see below).  Although first collected in 1901 and scientifically described in 1910, the giant jellyfish,Stygiomedusa gigantea, is rarely collected or seen.  A paper in 2010 by Mark Benfield and William Graham found that only 110 observations of the species had been made from 1899 to 2009.  However while rare, Stygiomedusa gigantea is found in every ocean except the Arctic.  The lack of this large jelly in the Arctic likely reflects a lack of deep-sea exploration there as opposed to a true absence.

This jelly is likely one of the largest invertebrate predators currently in the ocean.  Current size estimates put the bell diameter around 0.5-0.75 meters (1.6-2.5 feet). The species actually does not have tentacles as we associate with other jellyfish. Instead what you see dangling down are oral lobes which can reach ~10 meters (32.8 feet) in length.  Benfield and Graham found two individuals in the Gulf of Mexico clinging to underwater structures and hypothesized the jelly uses its long oral lobes to hold on to and trap prey.

Although not all fish appear to be simply food for this giant jelly.  Drazen and Robison found that the small fish Thalassobathia pelagica swimming continuously swimming around the bell of Stygiomedusa gigantea. Interestingly, nematocysts of another jelly, the common moon jelly, could sting the fish but it was unharmed by the those of S. gigantea.

The latest video. I’m not sure what is up with the music.