Recently, on Twitter and Facebook I noticed graphs of climate change and its impacts being posted.  These were often unaccompanied with data sources or links. A lot of misinformation occurs across the web in both denial and support of climate change. Beyond a shadow of doubt, anthropogenically caused climate change is occurring.  However, we do the public no favors by posting graphs with uncited sources and complete transparency about sources and data. Below I provide 15 graphs of climate change providing their sources.  Overwhelming they portray an alarming picture of changes on our planet.  I chose only graphs that depict current or past changes.  I specifically excluded projections and focused on patterns where the climate change link is not speculative.

I encourage you to post other graphs below as long as the meet my three criteria (reliable source, unspeculative connection, no projections) and you provide a source link.  Anything that does not meet this criteria will be deleted.  I will do a followup post with all of your suggestions. Also follow along on Twitter at #climategraphs 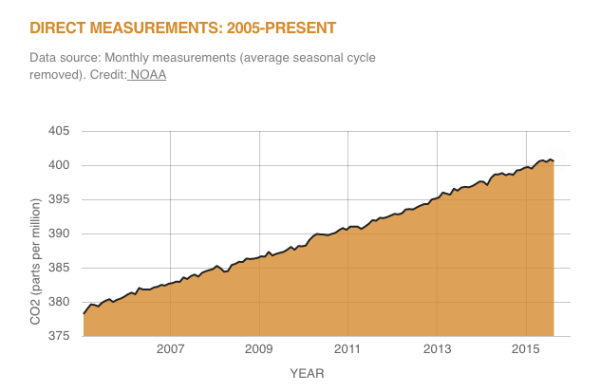 13. Northwards shifts center of abundance for North American birds from 1966 to 2014