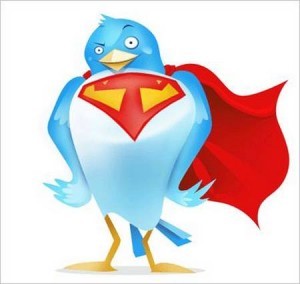 Tweeting during a conference and joining in on a conference hashtag is becoming the norm for scientists on Twitter. Indeed conference’s hashtags are becoming a virtual subconference. But instead of just Tweeting to the conference hashtag flex some social media muscle and become a Twitter god. How you ask? Tweet your own talk by scheduling Tweets to occur to autopost during your talk.

Now lets schedule some Tweets! You can do this through Twitter but honestly Twitter does not make this easy. It requires multiple steps. I prefer using Tweetdeck. Clicking the Tweet composing button brings up an option for scheduling the Tweet. 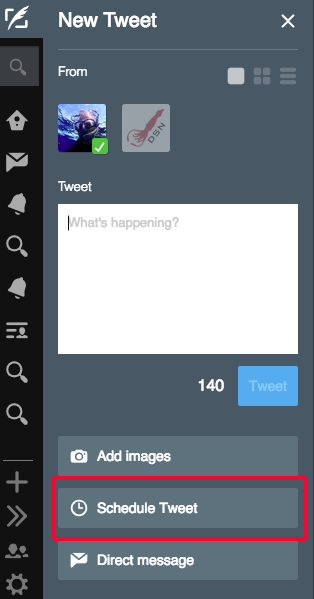 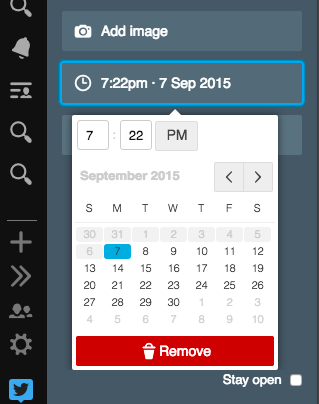 Some other tools for scheduling Tweets are also available (see this post also).  I also really like Twuffer for its easy display and ease of use.

Choose a time a minute or so past the start of your talk for your first Tweet. You may opt to schedule them to start later if you feel the culture of the conference is for talks to start several minutes past time. Schedule Tweets to hit one per minute apart form each other. Protip: Make sure the computer in which you schedule your Tweets from is set to the same time zone as the conference. Yeah I’ve made this mistake…in the last week…at my latest conference.

Load your presentation to SlideShare (You can see my presentations here). The first Tweet you schedule should be a link your entire presentation. This will make it easy for people to find figures and statements they may miss. Protip: Alternatively, you can go with figshare, which will give your presentation a DOI that can then be cited in papers and other works.

What should you Tweet? Anything related to your talk. Definitely Tweet links to your papers if you are talking about the research within in them. I like to provide a link to a downloadable PDF. However, indicate the link is a PDF so others are not caught by surprise by a downloading file.

Also Tweet any images you want disseminated, main points, links to relevant papers, and figures. Also Tweet a thanks to coauthors and acknowledgements. Protip: Make sure to use their Twitter handles. They can RT and help promote the talk to their networks. Make sure to use the conference hashtag!  Yeah I’ve messed up this one by using the wrong hashtag. Another Protip: Bonus points if you make your own hashtag so people can see all of your schedule Tweets.

Protip: Do not schedule too many Tweets. You need to find a balance between getting relevant information out and overwhelming the conference hashtag. As a general rule, do not schedule more Tweets than slides in your presentation. For a 12-15 talk plan on 10 or so Tweets. For a longer talk 30-60 minutes, plan on no more than 20. Trust me it takes a bit of work to schedule Tweets. You will be burned out by 20 or so.

2 Replies to “Become a Social Media Pro User: Tweeting Your Own Talk”