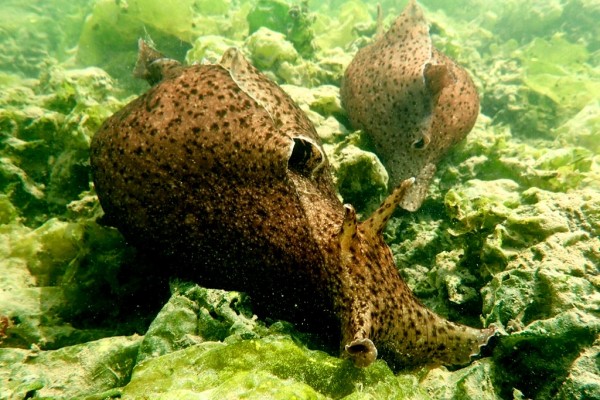 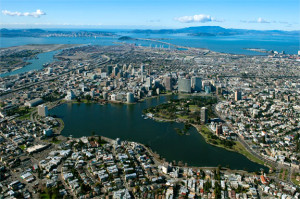 Lake Merritt, once a salt-water lagoon, and an extension of San Francisco Bay, now the heart of Oakland. Photo by Chamois Moon.

At the heart of downtown Oakland, San Francisco’s stereotypically grittier and unpolished sister city across the San Francisco Bay, lies an urban lake that is experiencing a remarkable rebirth. Lake Merritt isn’t so much a lake as it is a contained, urbanized arm of the Bay itself. It is a brackish-water lagoon divided from the cement sphincter of sky scrapers and apartment buildings by narrow strips of oak-studded parkland. I’ve lived by the Lake for the greater part of three decades, and while it hosts a flotilla of migratory ducks in the spring & fall, it was a figurative dead-zone devoid of the rich marine life in the Bay, and sometimes a literal dead-zone when bodies were dredged out of the muck. While making a picturesque and relaxing place to hang out on a warm summer night, the summer days often stank of rotting invasive algae and sulfur-producing bacteria. 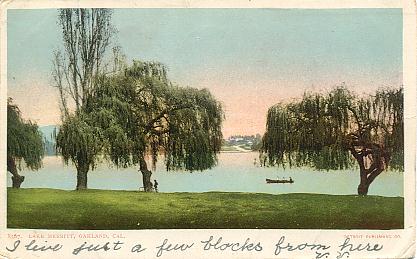 Lake Merritt circa 1900 after the federally-mandated cleanup of human waste.  I too live a just a few blocks away from there.

In precolonial times, expansive shellmounds around the slough attested to the abundance of shellfish and game that allowed the native Ohlone peoples to thrive. Even with the influx of settlers into the mid-1800’s Lake Merritt was still a functioning part of the San Francisco Bay Ecosystem, The Lake was a vibrant tidal slough that brought migrating salmon to Oakland’s creeks, with historic records of river otters, harbor seals, and enough ducks to host several hunting clubs. Encroaching urbanization morphed scattered clusters of Gold-Rush farms, factories, and merchants into a bona-fide city, forcing changes to the Lake. A cement lining replaced the muddy banks of the slough, and a gated dam was placed at the connection with the Bay in an attempt to mediate the flooding from heavy seasonal rains. In 1870, Lake Merritt was declared the nation’s first wildlife refuge, but such a title didn’t guarantee special protection. Urban runoff carrying sediment and pollution produced a shallow, mildly toxic environment that often became too warm and anoxic in the summer, and too laden with fresh water in the winter, to maintain any real biodiversity. With more residents came more waste. For several decades in the mid and late 1880’s, Lake Merritt was the sewage system for much of downtown Oakland, causing such a literal stink that the federal government intervened to correct the health concerns associated with floating islands of waste and banks caked with human excrement.

The Idyllic urban wildlife refuge of Lake Merritt, as depicted in this tourist brochure from the 1920’s.

Despite this, Lake Merritt remained both a source of civic pride and a focal point for many of Oakland’s social and municipal events. It’s not surprising that in 2002, bond measure DD was approved by more than 80% of Oakland voters, creating a fund of almost $200 million that would renovate much of the city around the Lake from its urban creek headwaters to its connection with the San Francisco Bay, restoring Lake Merritt into a functional ecosystem. Pots of money from this initiative restored the crumbling infrastructure of the Lake, placed trash filters that caught litter carried by curbside gutters, and provided more public education about the health and ecology of the Lake. More importantly, dredging the Lake and modifying the canal that connected it to the San Francisco Bay flushed fresh ocean water with every tide, feeding cool, oxygenated, nutrient-rich water into the Lake. 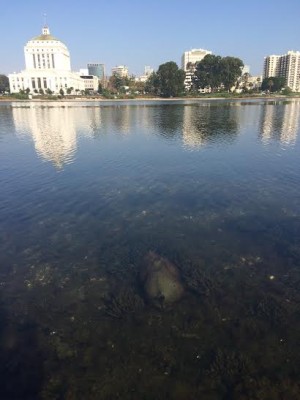 It took a decade after public approval of the bond measure to begin full implementation, but when it did, results were quick and dramatic: schools of silverside and jacksmelt boomed, feeding growing numbers of terns, herons, and kingfishers. Young steelhead salmon were seen for the first time in decades, as were California Bat Rays feeding on the growing clusters of native and non-native mussels. River otters were spotted for the first time in a century. The real testament to the ecological invigoration of the lake were the lush and diverse gardens of marine algae, and the giant sea hares they fed.

Sea hares, specifically the California Sea Hare (Aplysia californica), are large slug-like gastropods that lack a shell, but make up for this minor shortfall in sheer slimy bulk. As California’s largest gastropod, they can measure two and a half feet long, and weight up to 15 pounds. This year Lake Merritt hosted a population boom of the animals for the first time in my recorded memory of observing the lake. Promoting a natural tidal cycle created a cascade of new colonization. The saltwater influx from the Bay improved conditions and nutrients that produced abundant algae growth, and also brought tiny larval sea hares into the Lake to settle and feast on this algae. This year, their population got a bit of a boost with warmer El Nino waters bringing even more larvae than usual into the Bay. As the sea hares grew into their brown, tan, purple, and green super burrito sized adult stage, they mingled in large orgiastic masses of mating and egg-laying. Being simultaneous hermaphrodites, the sea hares piled into groups of two to two-dozen, exchanging sperm and egg with each other, and leaving behind long strands and woven clusters of neon-greenish yellow eggs. 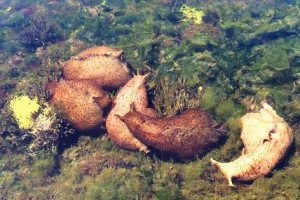 On a particularly sunny July Saturday, the Lobos Marinos and I hosted an informal community-based interpretation of more than 171 sea hares along the eastern bank of Lake Merritt, where hipsters, hip-hoppers, yuppies, young families, and old couples wanted to know what the heck these things were. The main question was “can you eat them”, to which I relied “yes, you can eat them, so long as you don’t mind their poison glands”, but the no-fishing policy at the Lake actually prohibits the take of sea hares. Some people thought them interesting though a bit disgusting, while others, after learning how Oakland citizens voted to restore Lake Merritt, felt a little more of that Oakland pride. For me, an Oakland taxpayer, renewing the Lake back into a vital ecosystem was worth the money. Today, more than three months later, the boom of sea hares is over. The last breeding adults are at the end of their short lives, with those before them leaving behind decaying masses of mucus. Winter rains will reduce the salinity of the Lake, yet this surge will flush the newly-hatched larvae back into the Bay. Lake Merritt’s restoration will continue for several more years, but with the next summer, the sea hares will hopefully return.