Yes, that’s a direct quote from National Public Radio. I was giggling this weekend when I turned on the legendary NPR quiz show Wait Wait..Don’t Tell Me, and heard actress June Squibb (naturally) answering trivia questions about giant squid. The show didn’t delve very deep into the science, so I thought I’d go a little further with a blog post.

What did I learn? Well, as hinted at in the title of this post, female squid can acquire testicles on command (sort of – female market squid (Doryteuthis opalescens) can control the coloring on a specific white stripe that gives the appearance of testicles on their body. So they kind of just paint on their balls when needed. Link to original study is here.)

Secondly, some squid have “elbows”. Specifically, the show was talking about the creepy alien-looking Magnapinna (bigfin) squids that have been caught on camera hovering eerily in the water, while holding their tentacles at 90 degree angles. 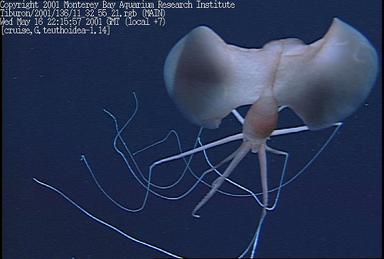 So put on your yoga pants, grab your pumpkin spice latte, and listen to this fun segment from Wait Wait..Don’t Tell Me: