The Notorious B.I.G., Mase, and Puff Daddy understand. Increase one variable in a system and another variable rises en suite. For the B.I.G. this was money and problems. It’s like the more money we come across. The more problems we see. In the biological realm, increasing the food available increases the number of species. More food, more species.

In the case of B.I.G., Mase, and Puff how more money becomes more problems is clear. The trio “rock” and “sell out in the stores” which leads to more money. Bag a money much longer than yours. This leads to more purchases. Gotta call me on the yacht. The success and belongings are coveted by others who try to bring the trio down in an effort to elevate themselves. Know you’d rather see me die than to see me fly. But scientists are much less clear about how mo’ food leads to mo’ species. Scientists have erected dozens of hypotheses to explain this rather simple pattern.   Enter a deep-sea experiment that I dedicated 10 years of my life to.

Wright posed the more individuals hypothesis. The basic ideas is that low food supports smaller populations of species; any species is likely to be represented by just a few individuals. This makes these species more susceptible to being wiped out locally by a catastrophic event like a storm or predator. If in low food environments species are often going locally extinct, exacerbated by their low population numbers, then these environments are likely possess far less species overall. Wright’s hypothesis is ultimately a no food, mo’ problems, no species hypothesis.

Tilman, in one of the most influential papers in ecology, proposed the resource-ratio hypothesis. To simplify his elegant idea, few species are biologically equipped to deal with any resource at low availability. Mo’ food, mo’ species that can occur. Tilman actually proposed that species in resource-limited areas were just subsets of those living in high-resource areas. This is because any species can benefit with a little mo’ food, but conversely not every species can live with a little less. Tillman took these ideas a step further and actually predicted that at very high food availability the number of species should decrease because another resource would become limiting, i.e. high food habitats are not some beautiful utopia where everything, e.g. habitat space or other nutrients, is abundant.

Of course this is not the real name of the hypothesis (none of the headings are). Several ecologists have converged on the idea that mo’ food allows for more specialized species. These diva species are very particular in their food type requirements. At low overall food availability, these specific food types are rare and cannot support a diva species. To restate, mo’ food allows species to be specialized. No food and species need to be generalists and take what they can get.

Another ideas is that mo’ food allows for mo’ prey. This in turns supports mo’ types of predators, thereby increasing diversity. A more sophisticated variant of this is that mo’ complex food webs, containing mo’ species, can occur at higher food availabilities.

This is a hypothesis of my own creation. Basically, there is “right” size for a given animal to be. This optimal size reflects a balancing of constraints. For example, too big and a species requires too much food. Too small and species does not have enough fat reserves to weather starvation. This suggests that areas with little food would only possess species of this intermediate and optimal size. Mo’ food and these caloric constraints are released and and species can get away with not being an optimal size. Thus both large- and small-sized species are allowed increasing diversity

Chase proposed another hypothesis that is fundamental to the mo’ food, mo’ species pattern; this pattern can only exist when low and high food habitats are isolated. If migration by adults or larvae can occur from high food to low food, diversity will be artificially elevated in low-food habitats. These tourist species from high-food areas cannot sustain themselves in low-food areas without consistent visits of individuals from these high food areas. Cut the flow of tourists and the diversity of low-food habitats diminishes.

Scientists have published lots of creative studies testing aspects of these ideas. However, studies are rare that experimentally alter the food supply to a habitat and observe what happens. It’s not obvious how nor is it easy to increase the amount food at a coral reef or tropical rain forest. Mesocosm experiments, in which scientists creates an artificial system like a miniature ocean in a beaker or aquarium, provide exciting opportunities. My friend and colleague, Allen Hurlburt, conducted once such experiment in which he manipulated the amount of banana in containers.  Fruit flies collected in the rainforest where then allowed to colonize. It remains a beautiful and elegant experiment demonstrating the importance of food in controlling diversity. Allen’s study served as the inspiration for the wood-fall experiment.

Wood falls are the perfect experimental system to test mo’ food, mo’ species hypotheses. Each of the dead pieces of wood on the deep-sea floor represent little food islands. The background and typical deep-sea, muddy bottom is a food desert. The species occurring on wood falls are ultimately dependent on only the wood for nutrition. By ultimately controlling the size of the wood fall, we can control the amount of food the community of species receives. 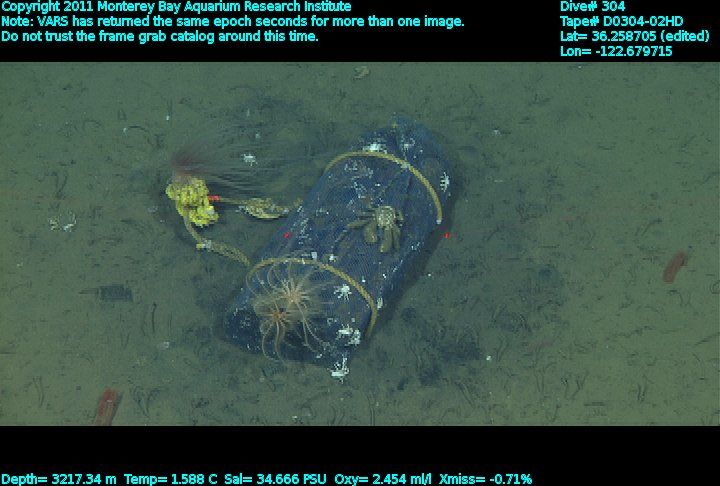 In 2005, Jim Barry and I chunked 32 Acacia log into the deep ocean off the Central California coast. In actuality, we placed them with an ROV at spot over 3 kilometers deep.

Five years later we collected half of the wood falls. Two years after that we returned for the other half.

Ten years after initially deploying the wood falls, the main paper from this work is now available as preprint. The nearly decade this experiment took to realize actually results in part reflected the length of the experiment.  However, even once collected a considerable amount of effort was need.  In the last three years, I spent countless hours meticulously sorting all the animals, nearly 13,000 individuals, from the wood falls. Taxonomists, all coauthors on the paper, spent many hours identifying these to species. With the analyses taken over a year plus the writing of the manuscript…well it adds up.

Thankfully, with increased wood-fall size, i.e. increased food, the number of species actually increased. Strikingly, no individual hypothesis was the smoking gun for this increase in diversity. 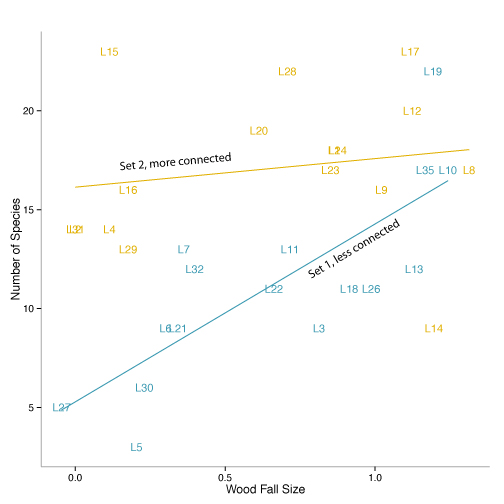 Rather the mo’ food, mo’ species relationship reflects a combination of routes. In accordance with the mo’ individuals, mo’ species hypothesis, the total number of individuals increased with wood fall size, and was concordant with rises in the number of species. As predicted by the nothing-special hypothesis, the species on smaller wood falls, i.e. food poor, were just subsets of those species occurring on larger wood falls, i.e. mo’ food.   Increasing wood-fall size also lead to increased rare species, supporting the diva species/unique and special snowflake hypothesis. Increased larval connections between small and large wood falls also seemed to ameliorate the mo’ food, mo’ species relationship in conjunction with the tourist hypothesis.

I am just finishing examining body sizes of all the wood-fall species, but interestingly my pet hypothesis about miniatures and giants does not seem to hold. The pattern is far more interesting. Thanks to the many who supported my crowdfund project (I still love that video), David Honig and I are beginning to construct the food web through stable isotope analyses.

Notorious B.I.G., Mase, and Puff Daddy lamented the rise of problems with more money. However, to all three of these artists the reasons why this occurred were pretty straightforward. Haters gonna hate. People gonna covet your yacht. The biological world is much more complex. As simple as mo’ food, mo’ species is, the reasons why this elegant pattern exists represents a variety of interacting processes, only some we are beginning to understand.