A sunken city of NYC subway cars lives off the coast of Delaware – yep, you read that right. They were sunk there on purpose, to serve as artificial reefs that attract fish. And, er, we’ve apparently been throwing a lot of things down there to see what happens – think “Will it Reef?” (a deep-sea version of “Will it Blend?”) 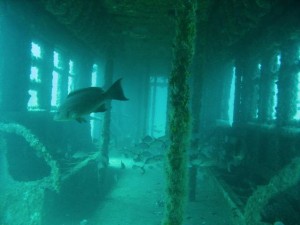 Gothamist Photo via Express Water Sports – you can scuba dive this site too!

In the last several years, the reefs have drawn swift open-ocean fish, like tuna and mackerel, that use the reefs as hunting grounds for smaller prey. Sea bass like to live inside the cars, while large flounder lie in the silt that settles on top of the cars, said Mr. Tinsman, the Delaware official.

States have experimented with other types of artificial reef materials, including abandoned automobiles, tanks, refrigerators, shopping carts and washing machines.

Subway cars in general, he said, are roomy enough to invite certain fish, too heavy to shift easily in storms and durable enough to avoid throwing off debris for decades. (via NY Times article)

Gothamist has some great photos of these subway car shipwrecks, but if you want an even more immersive experience then check out this video of a subway car scuba adventure: