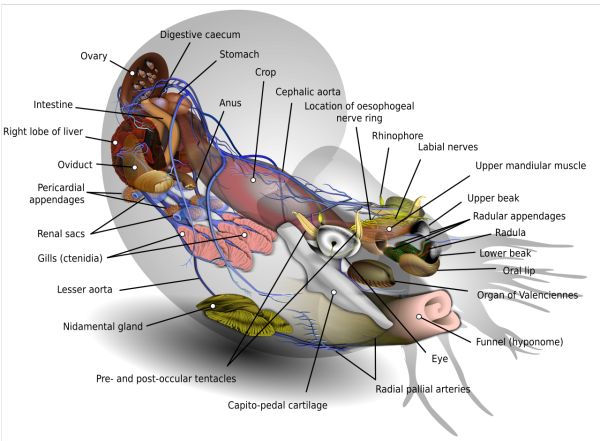 Diagram of the anatomy of an adult female Nautilus pompilius depicting the digestive, reproductive, and some of the circulatory, nervous, and muscular systems. K. D. Schroeder [CC BY-SA 3.0 (http://creativecommons.org/licenses/by-sa/3.0)], via Wikimedia Commons https://commons.wikimedia.org/wiki/File%3ANautilus_diagram-en.svg

Inside a Nautilus are the normal organs—the caecum, the stomach, the crop, the nidamental gland, etc.—with normal names and known functions. However, my favorites, yes I have favorite Nautilus organs, are the Organ of Valenciennes, Organ of Van der Hoeven, and the Organ of Owen. The fact these tissuey lumps of fun do not have a more common Latin or Greek derived name should hint you to the idea that the organ’s functions are bit of mystery.  The names instead come from the three naturalists who described these odd fleshy lobes. Each, the scientist not the lobes, described in amazing detail the internal anatomy of the Nautilus including these organs of unknown function. The organs are thusly and  rightly named for all three. 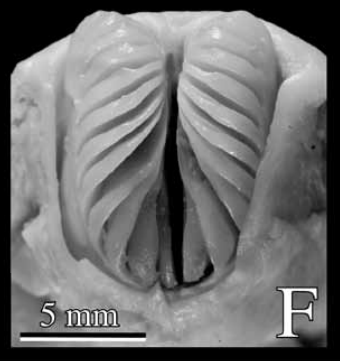 The Chambered Nautilus, Nautilus pompilius, was originally described by Linnaeus in 1758. However its anatomy was not known until Richard Owen’s dissection of a specimen captured by sailors in the New Hebrides, published in 1832. Owen wrote a 125 page tome, Memoir on the Pearly Nautilus, Nautilus pompilius, Linn., on every aspect of the Nautilus. Owen was a prolific British naturalist best known for coining the word Dinosauria.

Achille Valenciennes was a French zoologist who lived from 1794–1865 and studied under the famous Georges Cuvier. Valencienne published on the Nautilus in 1841.

Last, is the a Dutch zoologist Jan van der Hoeven who published extensively on Nautilus in the 1850’s. 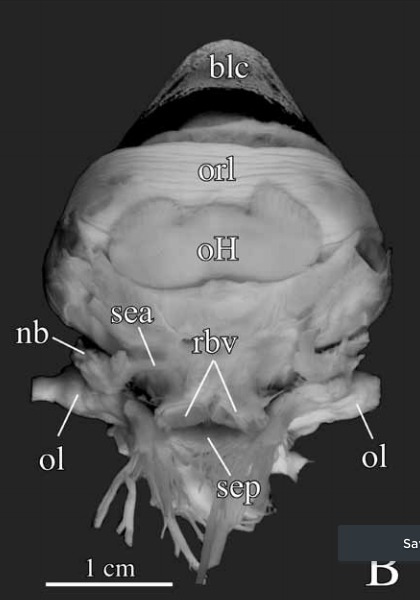 One of these organs is a distinctive projection that sits below the buccal mass (mouth and pharynx). Because the shape and structure of the organ differs between males and females the organ is probably linked to reproduction. In females, the organ is divided into two ridged and grooved structures and called the organ of Valenciennes. In males, the organ is a undivided flap termed the organ of van der Hoeven. It is thought that both organs may be glandular.  However, Jon Arnold in his chapter “Reproduction and Embryology of Nautilus” notes the presence of spermatophores, sperm packets, coiled on the female’s organ of Valenciennes.   This suggest the organ is analogous to the seminal receptacle, a sperm holding organ in female squids.

The last organ composed of varying layers, is also found in females below the buccal mass—the Organ of Owen. Interestingly, however, I  find there is often little mention or discussion of the organ. Owen’s organ is found in Wiley’s well-known work in 1902. In 1975 Saunders and Spinosa mention the cryptic organ. More recently in 2010, Shozo Hay Asaka and colleagues also mention it briefly “whereas in females, the buccal mass is centrally located, along with accessory organs [labial lobe and Owen’s organ].”

Valencienne and Owen actually had a science beef over whether cephalopods should be compared by their suckers or tentacles.

French researcher Achille Valenciennes had proposed that naturalists should compare cephalopods by using their suckers instead of their tentacles.  Owen disagreed. He responded that the cephalic tentacles of a Pearly Nautilus were numerous and comparatively small, indicating its lower place on the scale. Because development mean a reduction in number and an increase in size and ‘perfection’, Own pointed out that Valencieene’s proposal was not ‘comfortable with the general law of development,’ for it would reverse normal expectations.  After all the lowly-organized Nautilus had two large and highly concentrated suckers on each tentacle, while more highly-organized cephalopods hat two hundred smaller or simpler suckers.  Owen was confident enough to publicly reject Valencienne’s proposal by trotting out the common believe that higher development manet more coalesced parts, even though it was contradicted by the specific case of cephalopods suckers.

Given Owen’s rather pompous remarks, many of them wrong, perhaps it’s fitting that Valencienne’s organ is the one that received the most attention.