You might think that to clean up the problem of plastic in the ocean, you should place your cleanup device where there is the most plastic. And this isn’t a horrible initial assumption, which has been made by “The Ocean Cleanup”. But a slick new modeling study by Peter Sherman and Erik van Sebille show that’s not the case. If you want to extract plastic from the ocean, you had better cast your nets right off the coasts of the world’s largest polluters, not in the center of the North Pacific Garbage Patch as proposed by the Ocean Cleanup. 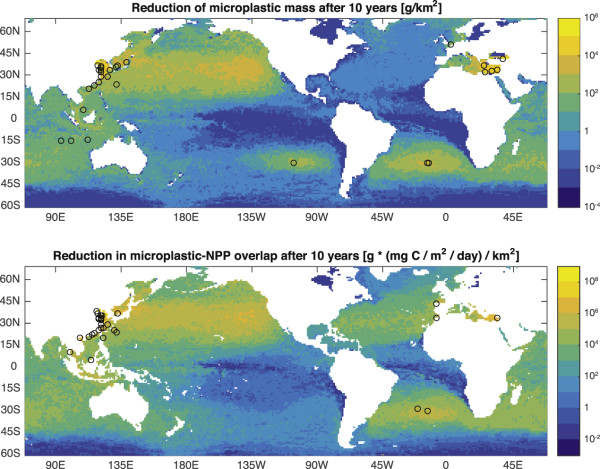 To do this, a bunch of plastic was dumped into a model ocean. They simulated litter bugs: countries that mismanaged waste and had higher population densities input more plastic; and chronic human addiction to plastic use: exponentially increasing plastic input from 1965-2025. Stir in some tracers, sprinkle in a bunch of hypothetical sinks to capture plastic, add in a dash of ecosystem modeling (moar plastic = moar problems for phytoplankton), prepare 500 different scenarios and simmer for a week*.

The results? You had better put most of your 29 giant plastic scooping machines close to where the biggest litter bugs reside, near coastal Asia. Where you shouldn’t put them? In the center of the North Pacific Gyre. 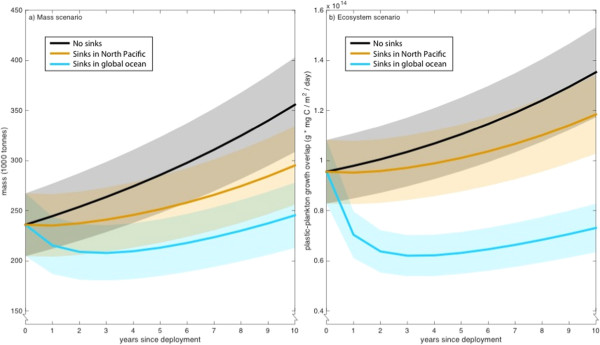 Even sadder, if you place the sinks at the most optimal locations, only 31% of the total plastic in the ocean will be removed by 2025. That means there will STILL BE A 4% increase in plastic. If the sinks are placed in the locations proposed by the Ocean Cleanup, only 17% of plastic will be removed. Bummer on both accounts.

But it’s not all doom and gloom people, this study lends support for reducing plastic use and just stopping it from getting into the ocean. That’s why I think projects like the Baltimore’s Mr. Trash Wheel and Seabin are so awesome, they are stopping trash and plastic from getting into the ocean right now. And while it’s known that I am not an ardent fan of the Ocean Cleanup, and this is certainly not an endorsement, this study does lend some support for relocating the proposed array closer to the coasts in shallower water which would be easier to design, build and service**. Here’s to hoping the Ocean Cleanup takes the conclusions of this research to heart, but I’m not holding my breath since they are only oceanographers.

*This paper judiciously doesn’t address engineering or even feasibility, but rightfully so. It just assumes that no matter where a plastic sink was put it operates at 45% efficiency (the number put forth by the Ocean Cleanup people), which is all you need to figure out the best place for your ocean cleanup booms.

** This is totally ignoring that when the array is moved inshore, you might not be in international waters anymore, subject to maritime laws of different countries and will now have to contend with much more ship traffic and larger sea life.

Share the post "Where is the best place to put your ocean cleanup device? Not where currently proposed."