When Darwin got down and dirty with his work on Barnacles (1846-1854), everyone still assumed there was no life at all in the deep sea. Thankfully he lived to see this “azoic” theory disproven by the Challenger expedition in the 1870s, but it would be another century before the world witnessed the glory of hydrothermal vents (and the splendor of their barnacles).

Vulcanolepas osheai, a barnacle that lives around hydrothermal vents (photo from EoL)

If you’re still skeptical about barnacles, you must be a robot. C’mon, look at that thing! If ninjas lived in the deep sea, they would use these barnacles as their weapon. Case in point: 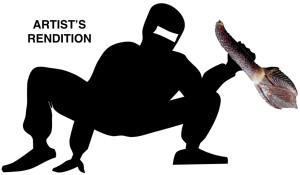 Barnacles live at hydrothermal vents all over the world, sometimes packed as densely as 1500 individuals per square meter. Currently, there are 13 described barnacles species across 4 taxonomic families. But morphology isn’t great at distinguishing species, so in recent years researchers have needed to rely on DNA sequences to untangle the relationships between deep-sea barnacle species. 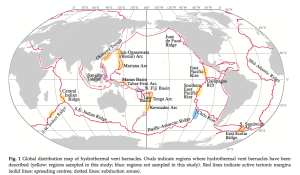 In honor or Darwin’s birthday today (collectively known as #DarwinDay), the most appropriate marine biology homage is story about the evolution of deep-sea barnacles. Herrera et al. (2015) have a recent, really fantastic paper, in Molecular Ecology, where they used fancy genomics tools to ask:

Herrera et al. collected 94 barnacle specimens from 18 hydrothermal vents worldwide (it’s really hard to do deep-sea biology, so this is actually LOT of barnacles painstakingly collected with robotic claws). Next, they sequenced three genes from each individual (the mitochondrial cytochrome c oxidase 1 gene, the nuclear 28S rRNA gene, and the nuclear Histone H3 gene), and additionally got crazy amounts of whole-genome data from each barnacle using a technique called Restriction-site-associated DNA sequencing (RAD-seq).

The results of this study showed that, contrary to prior hypotheses, barnacles have colonized deep-sea hydrothermal vents at least twice in the course of their evolutionary history. This can be seen by the two distinct clades (red and yellow) recovered in Herrera et al.’s phylogenetic Tree O’Barnacles: 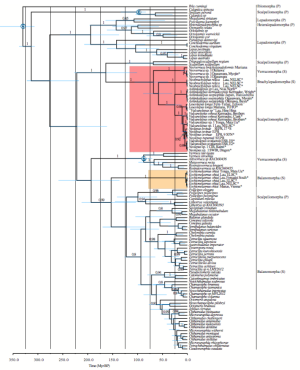 The largest group of vent barnacles (Clade A, the red clade above) seems to have originated in the Western Pacific Ocean and then moved east, colonizing “the Eastern Pacific, the Atlantic sector of the Southern Ocean and the Indian Ocean during the late Miocene to early Pliocene” (Herrera et al. 2015, using ancestral state reconstruction to analyze phylogenetic patterns). Once barnacles had adopted the hydrothermal vent lifestyle, it looks like they moved east. Based on molecular clock estimates using DNA sequences, the timing of their dispersal is concordant with geologic events such as the opening of the Drake Passage (41 million years ago).

We’ve only just begun dipping our toes into the world of deep-sea genomics. Given the time-machine-like powers of DNA sequences, and the fact that hydrothermal vents are essentially “islands” in the deep sea (thus giving us the perfect system to test some big evolutionary theories), the next few years should produce some really exciting deep-sea discoveries. Forget hoverboards: if Darwin came Back to the Future I’m sure he’d much rather have genomics.

One Reply to “Deep-Sea Barnacle Genomics. Because, #DarwinDay”