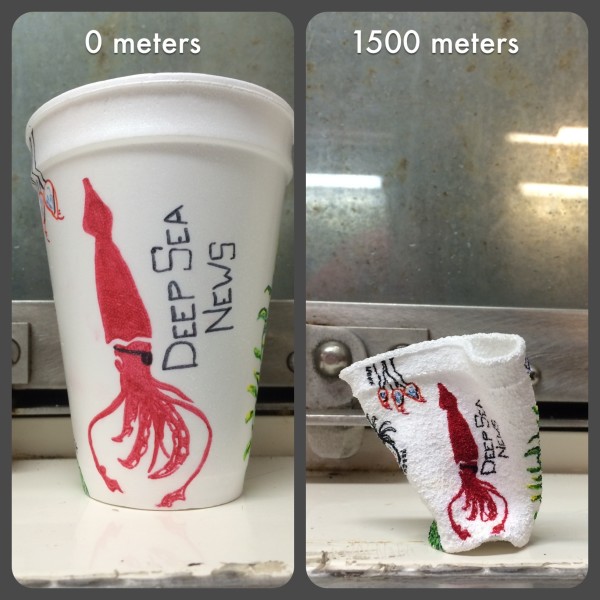 A comment on Reddit reminded me of a question that I have received many times. The question is always a good one because it stems from knowledge and deductive reasoning. The said question requires one to know that one of the most extreme environmental gradients is the increase of pressure with increasing depth, at the surface being 1 atmospheres and reaching well over 1,000 atmospheres in deepest parts of the ocean. The question? How do organisms survive this great pressure and what happens to organisms when you bring them to the surface?

I really never get tired of answering this question. The short: pressure, or the lack of when you bring them back up to the surface doesn’t typically kill deep-sea organisms warmer temperature does. Several studies indicate the deep-sea organisms can withstand a wide range of pressures. We frequently capture organisms at depth and bring them to surface alive, as long as we can keep them cool. They either live in aquarium in the laboratory or even shipped across the country alive. I’ve personally kept or seen deep-sea snails, echinoderms, crabs, giant isopods, and cephalopods in aquaria. Some pelagic organisms also have amazing vertical migrations during the course of 24 hours that can encompass 1000’s of meters and many levels of pressure. Basically, putting a low-pressure adapted animal into high pressures will often kill it but deep-sea animals often seem immune to the release of pressure.* Understanding how deep-sea animals are adapted to pressure will help you understand why this is.

Basically, the release of pressure does not make any of these adaptations or animals stop working. In a simply, and perhaps stupid analogy, if I wear a hat outside to prevent my bald head from burning in the sun, the hat doesn’t cause me issues inside where no sun is present.

*All this being said I’ve tried to collect a particularly gelatinously, red, sea cucumber several times. Each time at the surface when I pull the collection canister off the ROV the canister is filled with a thick red Kool-Aid, which I presume is the remains of said red, sea cucumber.

5 Replies to “Under Pressure: Will Deep-Sea Animals Explode or Implode on the Surface?”