Out there in the open ocean is a nudibranch sea slug that looks like a fish, and for the last five months I’ve been obsessed with it. I wrote an article about this fishy slug, called Phylliroe, back in November (link to original article here, which is also posted below). But despite all my best efforts (including harassing friends and colleagues) I wasn’t able to find a video. So I’ve been looking every few weeks ever since. Always hopeful, never successful. BUT LO! The internet works in mysterious ways! Kaj Maney*, an underwater videographer and owner of Dive Centre in Ambon, Indonesia, was rummaging through some old files when he found the video below. He had no idea what the animal was, so he asked for help on the Facebook group “Marine Creature Identification.” And once he realized he’d filmed a Phylliroe he sent the video to me. Kaj told me via email that “the funniest/saddest thing is that I had completely forgotten that I had ever filmed it!!” And it’s flat out the best wild Phylliroe video I’ve seen! I mean, CHECK THAT SLOW MO!

So without further ado, I give you Phylliroe:

*If the name sounds familiar, this is the same Kaj Maney that filmed the incredible sea sapphire video that is now all over the internet. He’s a legend…

Biologists have a habit of naming things after cool animals. Cars named after comb jellies, internet passwords after giant squid. Most of these names I recognized, but then I saw my friend’s wifi signal: “Phylliroe”, an animal name I’d never heard before. It took me a while to figure out who this odd and honorary creature was–there’s not a lot of info out there on Phylliroe. But oh man, I get it now. Phylliroe is bizarre. Why? Phylliroe looks like a fish, moves like a fish, hunts like a fish. So what is it? Ladies and gentlefolk, it’s a slug. If ever you need evidence that the world is huge and nature is crazy, a fish-shaped slug is it. 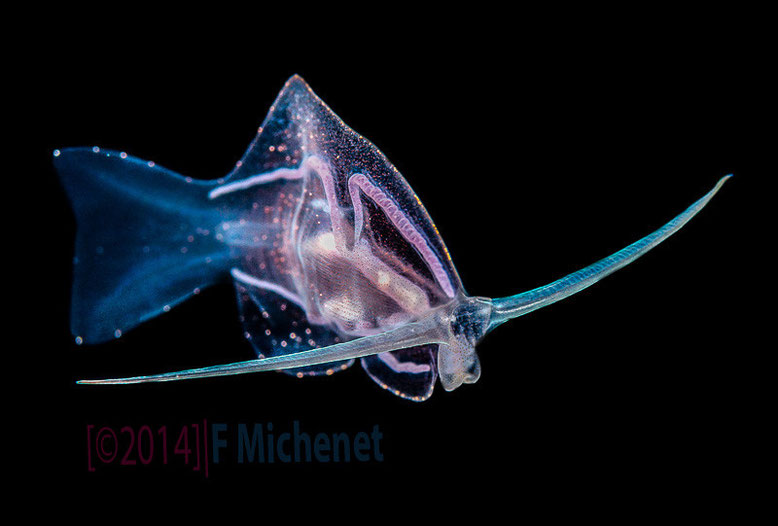 Meet Phylliroe, the swimming fish slug that can reach up to 5 cm in length. Photo (c) Fabien Michenet / nuditahiti.com

To be more precise, Phylliroe is a type of sea slug known as a nudibranch, and is about the size of a goldfish. It’s cousin to the much-loved sea bunnies and strawberry-smellingMelibes. Nudibranchs get pretty crazy in both pattern and shape, but in my mind Phylliroetakes the cake. So why does Phylliroe look so fish-like? In order to answer that question, we’ve first got to learn a little bit about this sly slug. Phylliroe’s ancestors long ago left the sheltered seafloor, evolving into open ocean hunters out for blood, or, if we’re being scientifically accurate, out for jelly. 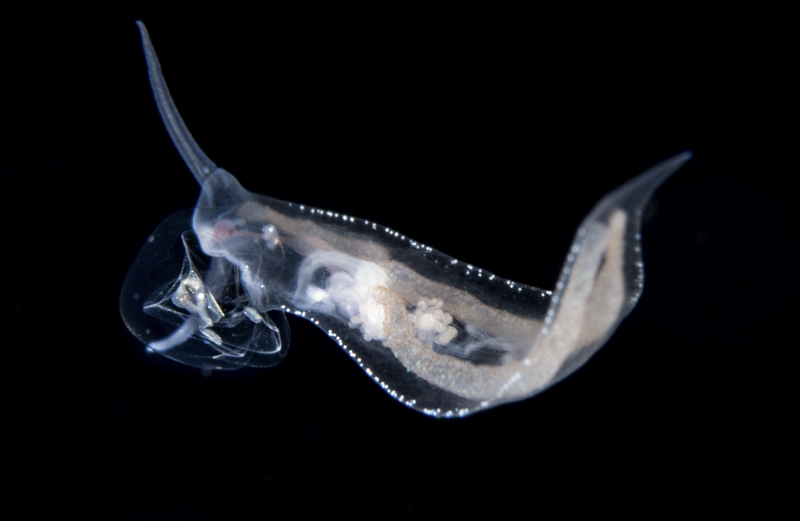 Phylliroe holding onto a small jellyfish. Its mouth is located between the two big horns, which are called rhinophores. Photo (c) Fabien Michenet / nuditahiti.com

Yep, this fish-shaped nudibranch noshes on jellies, like in the picture above. It likely uses those long horns, called rhinophores, to sniff out the scent of unsuspecting jelly prey. To hold onto jellies, Phylliroe uses a remnant of its old sea-floor slug days: its foot. Most slugs, whether land or sea, have a long slimy body that sticks to the ground. The crawling surface of this body is called the foot, and for most slugs the slow creep of this foot is what propels them forward. But Phylliroe’s body is different; it swims with a fish-like tail now, and its foot is mostly gone except for a little remnant right near its mouth. When Phylliroe tracks down a jelly it uses this tiny slug foot to stick to it, then slurps it up–one helpless tentacle at a time. Once consumed, this meal passes through the digestive tract, which is powered by digestive glands–those white zigzag lines in Phylliroe’s otherwise clear body. And when it’s done digesting? Phylliroe defecates from an anus located in the middle of its right side. Because why not? 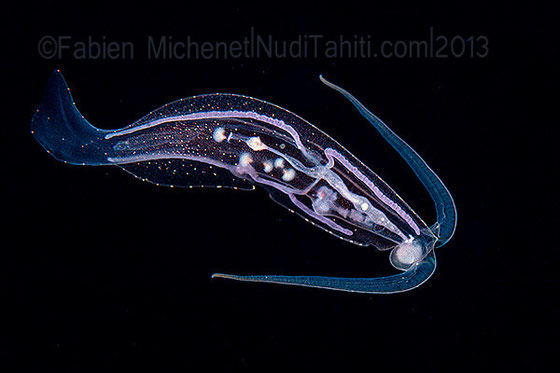 Think Phylliroe can’t get stranger? Guess again. Phylliroe glows. It is one of the few nudibranchs known to produce its own light, and apparently this light is exceptionally bright and beautiful, though few have seen it. The ancestors of Phylliroe not only evolved to look and swim like fish, they also developed the ability to bioluminesce, something very few other sea slugs can do.

But the question remains: why does Phylliroe looks so fish-like? What’s the deal? It’s hard to say for sure. Very few people have studied Phylliroe, so we have to make some guesses. Maybe the fish shape is a clever disguise. Maybe lady* Phylliroe find gentlemen* Phylliroemost sexy when they’re most fishy. My personal guess? Both open ocean fish and Phylliroeare fast-moving predators living in a watery world. It doesn’t matter if you start with a slug body or a dumpy guppy body; in this environment if you want to hunt down your prey you gotta get quick. And so over time, in the ancestors of both open-ocean fish and Phylliroe, the slow pokes were weeded out, and all but the sleekest and most agile remained, with streamline low-drag bodies and paddle-like tails. Two different animals, a slug and a fish, living in the same environment and hunting in similar ways evolved similar body types for similar functions. At least, that’s my guess. Functional convergences like these are all around us–they’re fascinating to think about but difficult to test. When it comes to Phylliroe, it’s hard to know anything for sure.

In the first part of this video from OpenBoatFilms, you can see an up-close shot of aPhylliroe, complete with undulating digestive glands. At the end you’ll see a swimmingPhylliroe looking very fishy.

Phylliroe, simply put, are elusive creatures. And this makes them difficult to study. Tracking down a Phylliroe requires advanced submersibles, or brave scuba divers willing to search in the open ocean (often at night). And there may be other factors making Phylliroe difficult to find. One of the most well-studied species, Phylliroe bucephala, lives a pretty odd life indeed. Adults of this species have relatively few young, only about 240 eggs–a small number for nudibranchs. Worse still, young P. bucephala prey on a single species of jellyfish. Each youngP. bucephala–tiny miniature of an adult–sticks to a jelly many times its own size and slowly eats it alive, like a moving edible house. No jellies, no Phylliroe bucephala. At least, that’s one guess for why they’re rarely seen [1].

I do know one thing: I now desperately want to see a Phylliroe in the wild. And in the meantime? Well, my car just got a new nickname.

*Phylliroe bucephala (and possible many other Phylliroe) are simultanious hermaphrodites, meaning they’re both lady and gentleman Phylliroe at the same time.

[1] Lalli and Gilmer (1989) Pelagic Snails. Stanford University Press. Stanford, California.*Nearly all Phylliroe facts in this article came from “Pelagic Snails”. This book is packed full of awesome biology, and not just on Phylliroe. A surprisingly wonderful must-read for those interested in open ocean life.