It is no secret that I find many denizens of the deep icky. Crustaceans are among them. But this video of a swarm of crabs is both beguiling and horrifying. TEEMING MASSES OF CRABS WALKING AND SWIMMING ACROSS THE SEA FLOOR.

Due to a wonderful confluence of ocean physics, seamounts are biological hotspots. Currents formed by upwelling and tides can bring deep nutrients up the slopes of these underwater mountains, and is probably what attracted the red pelagic crab, Pleuroncodes planipes, to this very location. Crabs live for the NOMS. Peak crab density is 77 crabs per square meter, roughly equivalent to having 77 one-inch sized crabs scuttling across a 4-person dining room table! Depending on how much you love seafood, this would either make or break your seafood dinner party.

The crabs also exhibited classic swarm behavior, where many animals moved together as a singular creepy mass and smaller groups of crabs merged with larger ones. Swarms may also have an important ecological function. This crab swarm stirred the benthic muck at the seafloor, creating a turbid cloud of sediment and nutrients 4-10 m high that could be used by other organisms. Be still my physical oceanography heart, but could the swarm also cause the little dips in seawater temperature and salinity near the seafloor? We can’t tell unless comparing to other swarmless casts, but it be a lot would be cooler if they did. 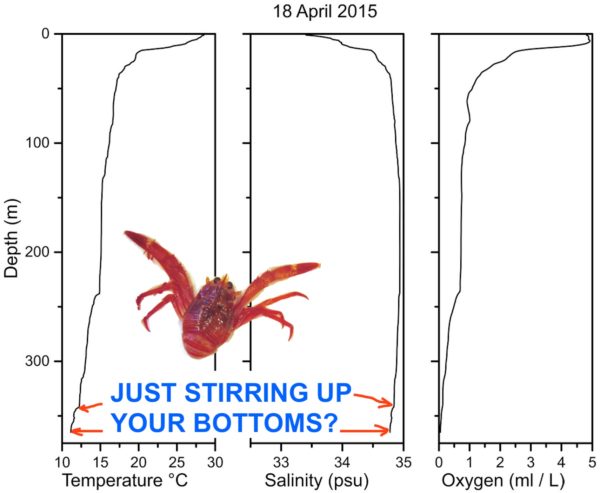 Want to know more about this crustacean chase? Check out the video below.